Even in our darkest hour, we are still better than the 2008 Huskies

Share All sharing options for: Even in our darkest hour, we are still better than the 2008 Huskies 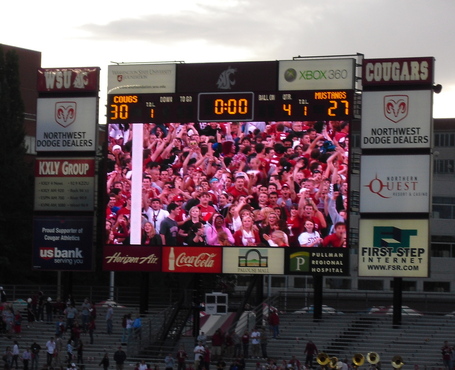 Grasu for the win. Again.

Make no mistake - this win is huge.

That was an inspired second half performance by the Cougar defense. We won. A football game!

Coming all the way back from a 17-0 deficit and winning in exciting fashion helps too.

Oh, but just to be clear students: I will have to publish some guidelines later, but please, those of you that did, don't ever rush the field against an unranked non-Husky opponent again. I know it's fun. But it has a time and a place, and that wasn't today.

And how about Wulff's gutsy decision to stick with Marshall Lobbestael paying off? He executed the best drive of his career to tie the game, and Jeff Tuel's redshirt is incredibly still intact.

I'll have more later, but for now, enjoy this. For 45 minutes, this game was a nightmare. The final 15? Vindication.