The Coverage: FSN NW/AZ have the moving pictures (just love the Arizona homer announcers). Find your local radio station here. Audio is also available online for a fee at wsucougars.com. 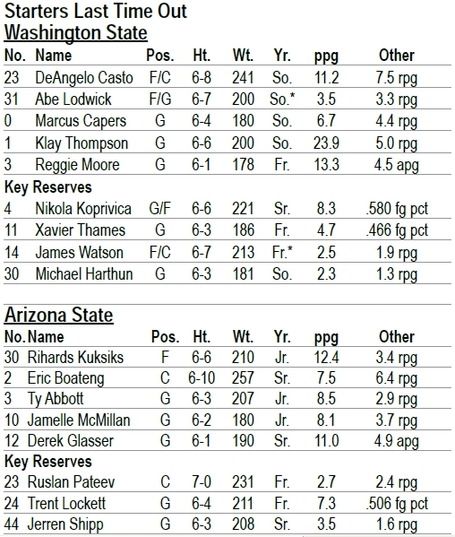 Klay Thompson, WSU: Wanna bust a zone? Shoot over it. Klay killed the Sun Devils in Tempe last year with 28 points on the strength of eight 3-pointers. It truly was Thompson's coming out party, but you can bet ASU will be paying a lot more attention to him this time around. We need a big shooting night from Klay.

Rihards Kuksiks, ASU: Kuksiks was a one-man wrecking crew against the Huskies on Friday, going off for 27 points. He's normally considered a perimeter sharpshooter, but he "only" hit five 3s on his way to that total. He also had nine rebounds, two assists, a steal and a block. He doesn't always score big points, but he's topped 20 three times this season. Fortunately, he's also prone to poor shooting nights. The Cougs would do well not to let him heat up.

Reggie Moore, WSU: Moore was the catalyst behind the win over Arizona, and he'll like be so today. There will be ample opportunities for him to leave his fingerprints all over today's game, whether it's attacking the gaps of the zone and kicking to Klay or drawing a foul, or even hitting a couple of 3s. It's that last thing that's most interesting to me -- will he be disciplined enough to only shoot quality 3s? And can he make two or three?

Abe Lodwick, WSU: Need two X-Factors today. Abe can shoot from outside. If he can rebound and defend competently enough, he could be the zone buster Daven Harmeling once was. Don't be shocked if you see Ken Bone try and throw a changeup at the Devils by playing Lodwick and Nik Koprivica on the floor at the same time in an effort to stretch ASU's zone.

Derek Glasser, ASU: A month ago, Glasser would have been a no brainer for the player to watch. But his shooting stroke seems to have gone on hibernation for the moment. Remember how he carried ASU after James Harden fouled out in Pullman last year, setting the stage for Taylor Rochestie's heroics? Yeah, that guy is still in there. This 6-1, 190-pound, hairy-chested white kid will make Moore look silly if he doesn't take Glasser seriously.

The Cougars win if... They hit some 3s and crash the offensive glass with relentlessness, since ASU is excellent at defending shots inside the arc. Those second-chance opportunities will be key. Regardless, WSU will likely also need a poor shooting night from the Sun Devils, whether through excellent perimeter defense or dumb luck. EDIT: I forgot to mention the turnovers. I think it goes without saying that you can't have second chances if you never get a first chance because of a turnover.

The Sun Devils win if... They get hot on offense from outside and defensive rebound. If they do those two things, the rest will probably take care of itself.