The Place: Friel Court, in front of thousands of rabid Washington State students.

The Coverage: No moving pictures for this one. Find your local radio station here. The audio is also available online for a fee at wsucougars.com.

Just so you know, a small sampling of some live televised games this evening:

Nice job Pac-10. I'm sure the demand for all those games is much higher than the Cal-WSU matchup (Also, I'm not saying that these games should not be on TV, I just think ours should be). 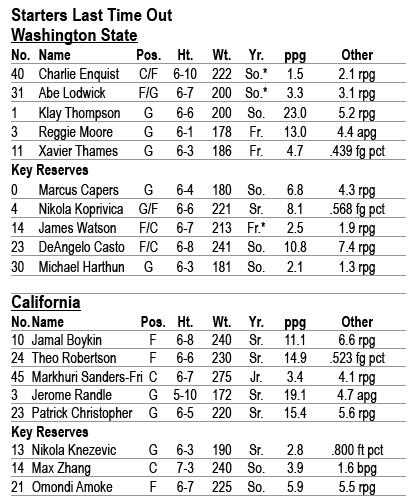 via wsucougars.com. (Methinks the starters may be just a tad bit different this time around!)

Jerome Randle, Cal: I'm a big Jerome Randle fan. A 5-10 guy that shoots over 50% on two pointers? That's awesome. This guy can score in bunches and has the ability to take over the game of the offensive end. If Jerome does well tonight, it will be very difficult for the Cougs to win.

Reggie Moore, WSU: Reggie carried the Cougs in the second half against Arizona last week with his ability to get to the rim and draw fouls. If he could do that today, it could help the Cougs out on the offensive end and the defensive end. Getting some of those talented Cal guards into foul trouble would be huge.

Klay Thompson, WSU: Even though Reggie may be able to make a greater impact tonight, I can't put Klay as just as X-factor. If Klay continues his struggles tonight, WSU will not win. To put up enough points to keep up with this Cal team, Klay has to be the scorer that he was early in the season.

Theo Robertson, Cal: He can shoot, that is well known among Pac-10 basketball fans. In Pac-10 play, he has become more versatile, drawing fouls and getting to the free throw line. The Cougs can't pay too much attention to Randle, or Theo will make them pay.

DeAngelo Casto, WSU: I know, it is the same guys every game. As Grady said in the podcast, these three have to perform well offensively for the team to do the same. Casto's offensive rebounding is key tonight. I pointed out in my Cal preview how important second chances are for the Cougs, and Casto is the main catalyst there.

The Cougars will win if... they crash the offensive glass and create a lot of second chances, and use those second chances to get to the free throw line and use the real statistical advantage that they have on Cal this year (free throw rate) to keep the game close.

The Golden Bears win if... they take care of the ball, rebound well, and continue to be the efficient offensive machine that they have been for the last two seasons. Randle having a nice night wouldn't hurt either.