The Place: Friel Court, in front of thousands of rabid Washington State students.

The Coverage: TV Blackout weekend continues on the Palouse! Find your local radio station here. The audio is also available online for a fee at wsucougars.com. 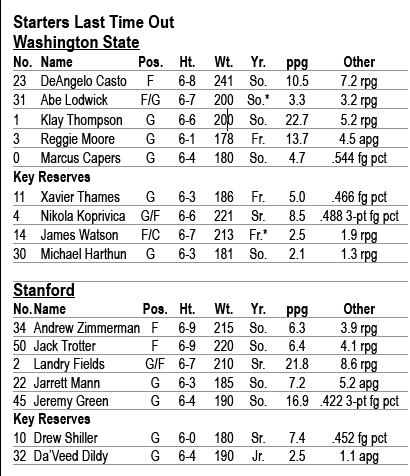 Nikola Koprivica, WSU: So maybe we are guilty of a little self-promotion here, but Nuss wrote a nice piece yesterday advocating for our lone senior to make his way into the starting lineup. From the comments it seemed that most of you agree. Will Bone take Jeff's advice? If Nik does start, can the Cougs finally get going early and not have to go through the routine of digging themselves out of a hole?

Landry Fields, Stanford: He uses 32.2% of the Cardinal's possessions and plays 88.6% of the minutes. His offensive efficiency is pretty solid. Where he really impresses is his ability to rebound (21.5 DR%), pass (20.9 assist rate), and avoid giving the ball away (12.6 TO rate). He is going to put up a nice stat line because of how much he has the ball in his hands. What is important is how difficult the Cougs make it for him along the way.

Klay Thompson, WSU: I mentioned yesterday in my preview that Stanford gives up a pretty high eFG% and this may be a chance for Thompson to break out of his slump. Of course, he will probably have to do it against a bigger and stronger Landry Fields. WSU doesn't need Klay to go off to get the win today, but it would sure make us all feel better if he did.

Jeremy Green, Stanford: Jeremy takes a lot of threes and shoots that at a high percentage (43.4%). Thanks in large part to that, he has put a very impressive 56.1 eFG%. He also rarely turns the ball over, ranking 46th nationally in TO%. If he gets hot, that could be just what Stanford needs to pull of the road win in Pullman.

The Cougars win if...They stick to their strengths. Continue to crash the offensive glass and get to the free throw line. They should have a nice day shooting against Stanford.

The Cardinal win if...They change the game with the turnover battle, forcing WSU into a lot of mistakes and taking care of the ball themselves. All the while having their scorers (Fields and Green) have a efficient days.