The Coverage: Television available on FSN Northwest. Find your local radio station here. Audio is also available for a fee online at wsucougars.com. 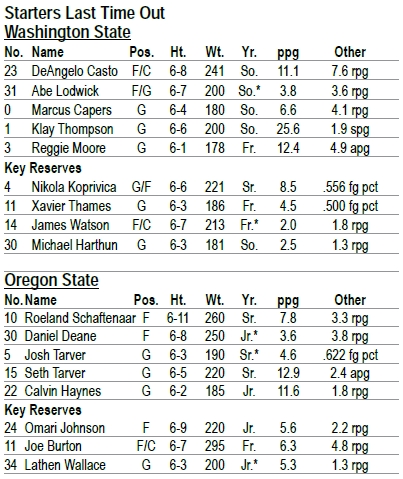 Reggie Moore, WSU: We've gotten a little spoiled by the true freshman -- so much so that when he had his first real off game of the year on Thursday, it stuck out badly. He was not efficient with the basketball, and his defense was even worse. Moore will have an opportunity to not only set the tone for the offense today (as we talked about earlier), but his defense will be hugely important -- if he loses his focus, as he's known to do, he'll get shredded by OSU's Princeton offense.

Calvin Haynes, OSU: After a slow start to the year, the Beavers' most explosive scorer has started to get it going. He's scored in double digits in the last four games, but that's largely due to the fact that he's taking twice as many shots as he was before. (Funny how that works.) He hasn't proven to be an especially efficient scorer -- just a 98 offensive rating -- and that's largely due to the fact that he doesn't get to the free throw line much. He is a good 3-point shooter, though, and we all know what an explosive 3-point shooter can do to the Cougs ... (Sorry, couldn't resist.)

James Watson, WSU: The Cougs have been searching for another reliable interior player to spell DeAngelo Casto. Charlie Enquist proved he's not that guy, while Watson seems to be getting better with each passing game. The Cougs played well while he was on the floor on Thursday, and there will be ample opportunities for him to get some minutes and grab some offensive rebounds and make an impact. (He had three against Oregon on Thursday.)

Xavier Thames, WSU: Another guy who seems to be getting better with each passing game. Thames is showing why Tony Bennett loved him so much -- his offensive outburst aside, the Cougs' defense was markedly better when he was on the floor against the Ducks. If Moore has another off game, Thames will have another opportunity to pick up the slack.

Roeland Schaftenaar, OSU: Schaftenaar can sometimes completely control a game from his place in the high post. The Cougs will need to contain his savvy passing and ability to drive from there.

The Cougars win if... they win the turnover battle and crash the offensive glass. The Beavers' offense sputters when it turns the ball over, and their defense thrives on getting stops from turnovers. As long as the Cougs don't short circuit their own attack by failing to get the ball on the rim, they should get enough second chances even if they have a poor shooting night.

The Beavers win if... they take care of the ball and then shoot it well, a perfectly reasonable proposition against a WSU team that doesn't generally force a lot of turnovers. That'll keep them close -- they'll likely need a big individual performance from someone like Haynes to put them over the top.