On Bone and minute distribution

Share All sharing options for: On Bone and minute distribution

A comment Ken Bone made during his teleconference yesterday about Klay Thompson perhaps getting fatigued got me thinking.

There are a lot of reasons why the Bennett system has been successful most everywhere it's been. The slow-down style does a lot of things for a marginally talented team -- frustrate opponents, increase variance -- but perhaps one of its greatest assets is that it allows a coach to play his best players for heavy minutes.

Yes, the system demands a lot out of a player defensively, but there is no sprinting down the floor on a fastbreak as offense often amounts to 20 seconds of rest before truly getting into your set. It's the reason why Kyle Weaver, Derrick Low and Taylor Rochestie all were able to play more than 80 percent of the minutes back in 2007-08 and still be fresh enough to roll through the first two rounds of the NCAA Tournament.

If you've got a couple of really talented players and a handful of role players who are willing to sell out for what you're doing, you can be very successful.

Which is precisely why many of you approached the reign of Ken Bone with just a little bit of trepidation. Besides requiring different skills, it also requires a greater number of players with those skills in order to work well. Teams that are successful playing a fast-but-not-blistering tempo (around 70  possessions) generally go nine deep in their rotation with guys rarely playing more than 75 percent of minutes -- check out teams like Kentucky, BYU, Minnesota, Purdue ... on and on. There are exceptions (such as Duke and Cal), but it pretty much holds true.

Bone is a guy who has been very successful in the past (in relative terms -- it was Division II and Big Sky, after all) playing at about that pace, so I was curious about how his usage of personnel this year compares to past years. Here's the raw data, showing the minutes per game of the top 10 players on each Bone squad, dating back to his first year at Portland State (there obviously is no available data for SPU back in the day):

The answer? It's different -- pretty significantly different. It's tough to see just from the table, so here's a graph that makes it a little easier to see. The colorful lines are PSU (it's not really important which year is which, because they all trend basically the same way) and the white line is WSU 2009-10. Click here to see the graph full size: 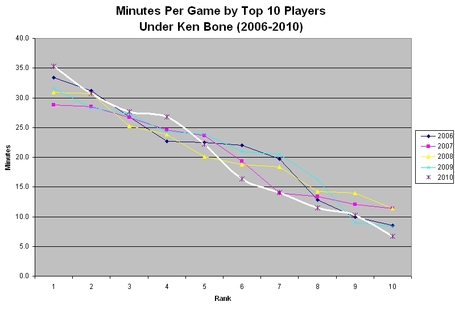 Basically, what you see is that he's asking for more minutes from his top four players, the same out of his fifth and a lot less out of his bottom five -- this despite playing at what amounts to a roughly average pace for a Ken Bone squad. Clearly, Bone isn't using his personnel in his ideal way.

The interesting thing is that it didn't necessarily start out this way. Looking at games early in the year, Klay Thompson was playing a lot of minutes, and Reggie Moore would log big minutes occasionally, but the rest of the minutes were spread around.

Then Gonzaga happened. With the Cougs holding a lead, Bone tried to get his best players a rest, and the game began to slip away. By the time he put his best unit back in the game, it was too late -- the tide had turned, and Gonzaga would finish the job.

In the wake of that game, Bone said he'd have to reevaluate his rotation in close games, and probably need to have his best players log more minutes. Often times, that's not a huge issue, but this team has been involved in an inordinate number of really close games. Hence, he's relied heavily on his best players, and the percentage of minutes being played by each guy becomes more and more skewed from Bone's ideal.

I think fatigue is becoming a very real issue for this team. A lot of guys have had to take either a significant jump in minutes (Moore) or play tougher minutes than they ever have before (Thompson) or both (DeAngelo Casto, whose situation is further complicated by recovery from knee surgery).

Faced with those two options, and seeing what we've seen out of this team recently, I really believe Bone has no choice but to rely more heavily on his bench players. However, that shouldn't be as scary of a prospect as it once was.

Early in the season, I understood Bone's decision-making process with the rotation. He had a bunch of unknown, unproven quantities whom he wasn't sure were going to be able to perform in games. But now, he's got a better idea of what he's got -- and what he's got is three pretty reliable bench players whom he probably needs to use more, and in higher leverage situations.

Nik Koprivica is already playing a fair amount for a bench player -- about 50 percent of the minutes -- but it's becoming more and more clear that Xavier Thames and James Watson are underused assets. Sooner or later, Bone's going to have to cast his lot with these guys, and let the chips fall where they may.

Might as well be now, because it's becoming increasingly clear that this team has hit a bit of a wall, and there are guys just waiting to step up.

EDIT, 1/21 at 3:05 p.m.: A reader posed a hypothesis that Bone is already addressing this in conference play. It's only six games, but I've added a line for conference play so you can all see what's happened since conference play has started. It's the black one (full-size graph here): 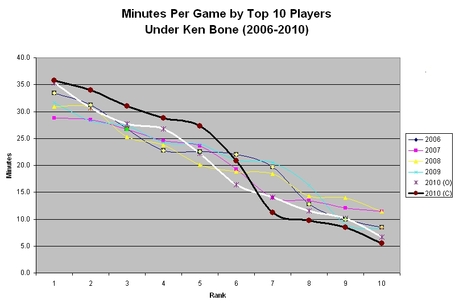 Yup, it's gotten worse, not better.