The Place: The Galen Center in Los Angeles, CA.

The Coverage: No television coverage. Try here for pictures (scroll to the bottom) or for a fee at usctrojans.com. Local radio stations here. Go to wsucougars.com if you love Bud so much you would pay to hear his voice. 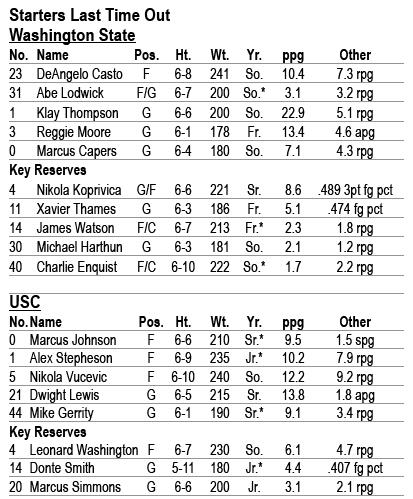 Nikola Vucevic, USC: Did you know that the Trojans only have one player with an above average offensive rating? Here's your guy. He is also an awesome rebounder and is significantly less annoying than that other Serbian that plays college ball is LA.

Nikola Koprivica, WSU: Why? Because this weekend is important. The round robin tournament has begun, with Vucevic's Trojans defeating Dragovic's Bruins. If WSU can get the sweep this weekend, our Nikola shall be declared King of Serbia (Nikola Knezevic is disqualified because I say so).

Reggie Moore, WSU: USC does not allow its opponents to shoot well. The Cougs will need some freebies to make this a game. Reggie is the best man for the job.

Dwight Lewis, USC: He's not a super efficient player, but he does take a lot of shots. He can get hot and have a real nice night now and again. Let's hope tonight is not one of those nights (But it will be of course, I jinxed it. Dammit.)

DeMarcus LodWatson, WSU: Since the Cougs probably won't shoot well, they will absolutely need to crash the offensive glass. USC has done well on the defensive boards overall, but can be vulnerable to good offensive rebounding teams. Get it done guys!

The Trojans win if...They shut down the Cougs the same way they shut down everybody (#1 defense in the nation).

Join us in the game thread!