The Place: Pauley Pavilion, where the Cougs have won twice. Ever.

The Coverage: FSN "National" (Not on my local FSN channel, it is on FCS Pacific.). Find your local radion station here. Audio for a fee at wsucougars.com. If you have any streams, share the wealth and put a link in the comments. 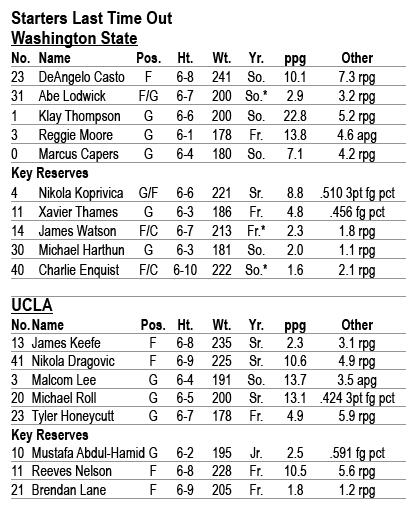 Michael Roll, UCLA: He is the most efficient offensive player for the Bruins while taking about 23.3% of the shots. Excellent three point shooter who could kill the Cougs if they get lazy on the perimeter. He can be taken out of the game if he is shut down outside, as he rarely gets to the free throw line. Guard him tight fellas!

Klay Thompson, WSU: UCLA gives up a very high opponent three point percentage. Who is going to guard Klay? It seems he will have the size advantage. Here's to him having a nice day in front of a "national" audience.

Reggie Moore, WSU: So what if Klay does not have that nice day? Well let's just have Reggie get to the hole at will, again and again and again. At some point, teams are going to have to focus their defensive efforts more on this guy to stop penetration. Klay will surely benefit.

Reeves Nelson, UCLA: Nelson is a talented freshman big who has gotten the ball a little more thanks to the departure of Drew Gordon. He is a solid rebounder and draws a lot of fouls. He could make a huge impact by getting Casto into early foul trouble.

The Cougars win if...They shoot well and and crash the offensive glass.

The Bruins win if...One of their shooters has a ridiculous game (Roll or Dragovic) and their quick guards are able to keep Reggie out of the lane, forcing the Cougs to score out of offensive sets (I forget what that even looks like anymore.)

The Cougs didn't win at Pauley for half a century. They have a chance to make it 3 out of 7 if they can pull through today, Not to mention clinch a winning first half conference record heading into their rivalry matchup with UW.