Why we really need Good Klay to show up Saturday

Share All sharing options for: Why we really need Good Klay to show up Saturday

It's been said for some time that as Klay Thompson goes, so goes our offense.

But I'm not one for conventional wisdom, so I decided to go in search of some empirical evidence that could shed some light on just how much impact Klay's performance has on our overall offensive effectiveness -- especially now that Reggie Moore seems to have become a legitimate scoring option.

Any analysis of team offensive performance has to, of course, start with offensive efficiency. Using that stat was a no brainer (for obvious reasons). But which of Klay's stats to use for comparison?

In the end, I settled on offensive rating, which is basically an individual efficiency metric. It has the added bonus of a 100 rating being average, just as with offensive efficiency, which makes for a prettier and easier to interpret graph.

Using offensive rating isn't totally ideal -- it's not really meant to be a game-by-game statistic. It's a lot more accurate when it has lots of data points, and it also has a higher top end than offensive efficiency -- I mean, Klay has surpassed 160 offensive rating three times this year, and you'll never see a team offensive efficiency that high. However, since what we're looking for is overall trends and not breakdowns of individual performances, I think it works. Here is the result presented graphically (full size chart here; full data can be seen here): 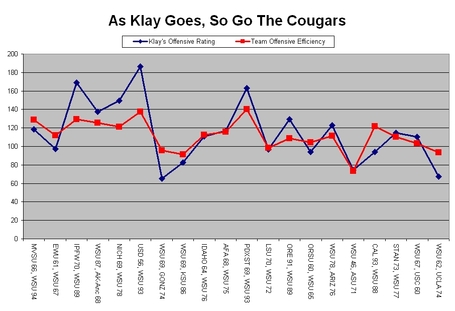 For those of you number geeks like me out there, how about this little calculation: Excel tells me the correlation between Klay's offensive rating and the team's offensive efficiency is +.84. For those of you who flunked stats or have forgotten everything you've learned, I'll just let you know that it most definitely reinforces what your eyes are telling you from the graph.

The implication is clear -- as we thought even before we began this exercise, as Klay goes, so goes our offense. However, I would caution against blindly making what seems to be the obvious conclusion: That the offense can only be efficient when Klay Thompson is efficient. I don't know if that's necessarily true.

Think about it this way. Klay Thompson is one guy who's playing around 18 percent of the team's total minutes but is ending somewhere around 30 percent of its possessions with shots or turnovers over the course of a game. So, doesn't it stand to reason that the offense would have a very difficult time being efficient if that player isn't being efficient? When a guy has the ball in his hands that much, and is taking that many shots, his individual performance is naturally going to have a disproportionate effect on the overall offensive efficiency.

I think the moral is that whoever's taking the shots -- whether it's Klay taking a huge number or they're being spread around -- that player needs to be scoring efficiently.

You need look no further than the Cougs of 2008 for evidence of that. They didn't necessarily have a go-to scorer who dominated the ball (although if it came down to one shot, there's no doubt who was going to have the ball in his hands), but spread it around to any number of options who each were able to score the ball in their own efficient way. The result was an offense that ranked 26th nationally in adjusted offensive efficiency and "shocked" everyone but us when it annihilated a mediocre Notre Dame defense in the NCAA Tournament.

If this team is going to get more consistent and start getting some sweeps instead of all of these splits in the Pac-10 schedule, one of two things has to happen:

Up until this point, Ken Bone has cast his lot with option one. It's an option that early in the year looked like the only viable one, but there's recent evidence to suggest that option two might be a necessary direction for this team to head.

First off, Klay is still getting a disproportionate amount of attention from opponents. Nowhere was that more evident than on Saturday, when UCLA sent two defenders at Thompson every time he touched the ball. That wasn't a huge deal earlier in the year, but as the level of competition in conference play has increased, so has opponents' ability to defend him effectively. In fact, his offensive rating over the first eight Pac-10 games is just a tick over 100 -- meaning, we essentially have an average offensive performer ending about 30 percent of our possessions. You don't have to be a math wiz to realize that's not a winning formula.

Second, we saw for the first time against Cal and UCLA that the offense can be reasonably effective even when Thompson has an off night. In both of those games, Reggie Moore and Nikola Koprivica picked up the slack.

While it's clear that Klay is a work in progress and he's still improving, with just 10 games left in the conference slate, it might be foolish to think that Klay's all of a sudden going to have some kind of epiphany and experience a scoring explosion for the remainder of the conference slate.

Because both Moore and Koprivica have shown ability we weren't sure they possessed when the season opened, it just might be time for Klay to look to give up the ball a bit more than he has. That's not to say he shouldn't look for his shot, but perhaps he should be a little more selective -- there's only a +.48 correlation between the percentage of shots he takes and his offensive rating, so it's not like he gets more efficient the more shots he takes.

I understand it's a bit of a quandary for Ken Bone, but it's been a while since we've seen a real benefit from Thompson force-feeding shots -- really, since LSU (which doesn't look like such an accomplishment anymore). While his ball-handling is improved, his high number of turnovers in conference play demonstrate he simply doesn't yet possess the skills to be a go-to guy in the Pac-10. He looks like he's wearing down under the demands of his role, as his foot speed often isn't good enough for him to get square to the basket for his jumpers. He ends up rushing his shot, and the result is what we've gotten over the past month -- a lot of inconsistency.

We need to see a different Thompson this Saturday against the Huskies. I still want him to touch the ball a lot, and I still want him to look for his shot every time he does touch it. But instead of spending five seconds trying to figure out how he might get his shot off, I'd like to see him quickly give it up if he doesn't have a wide open look or a clear advantage over a recovering defender that would allow him to put in on the floor. Ball movement has a tendency to end when it gets in Thompson's hands, and that has to change.

It's as simple as this: If Bad Klay shows up this Saturday -- taking a ton of forced shots, shooting 25 percent from 3-point range and turning the ball over against the Huskies' tremendous ball pressure defense -- the Cougars have very little chance to win. But if Klay either has a great shooting game or can use the extra attention he's bound to receive to help his teammates score more efficiently, then I really like their chances.

Personally, I think the second option is a lot more plausible at this point.