The Place: Hec Ed/Bank of America Arena in lovely Seattle, WA (How I miss it so...)

The Coverage: FSN National (supposedly in HD!). Find your local radio station here. Audio available online for a fee at wsucougars.com. Post any streams you find in the comments. 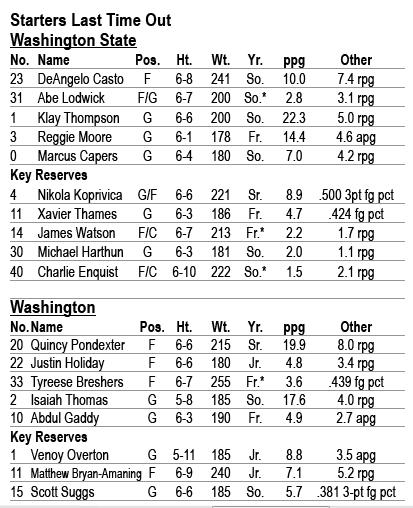 Quincy Pondexter, UW: "Q-Pon" is having a monster senior season for the Huskies. His ORtg is a ridiculous 122.3 while using 26.2% of the possessions. He also has been pretty solid on the boards, posting an 11.3 OR and a 16.7 DR%. He has played as well as anyone in the conference this year and he will be important on both ends of the floor.

Klay Thompson, WSU: Nuss wrote a nice piece (MUST READ!) earlier this week detailing how important Klay's offensive performance is to the Cougs' overall offensive efficiency. Go ahead and read that and you'll know why he is our "player to watch" this afternoon.

Isaiah Thomas, UW: He's always a threat to get in the lane and a very streaky shooter from the outside (Not afraid to jack up a three either, as 42% of his field goal attempts are behind the line). WSU will likely give UW a healthy dose of the zone and his penetration can disrupt that.

Reggie Moore, WSU: WSU and UW are pretty similar in that they have a slashing guard and a wing who do most of the heavy lifting on offense. Reggie is returning home for this one. Will he press? I'm guessing he won't. His ability to get into the lane and draw fouls in this one will once again be huge for Wazzu. UW's biggest weakness on defense is free throw rate allowed.

The Cougars win if...Klay is "selective" and efficient, the Cougs get to the line early and often, and the defense forces a lot of outside shots.

The Huskies win if...they bother Klay the same way most Pac 10 teams have been able to, force turnovers, and dominate the offensive glass.