The Place: The McKale Center in Tuscon, AZ

The Coverage: FSN NW/AZ have the moving pictures (Just love the Arizona homer announcers). Find your local radio station here. Audio is also available online for a fee at wsucougars.com. 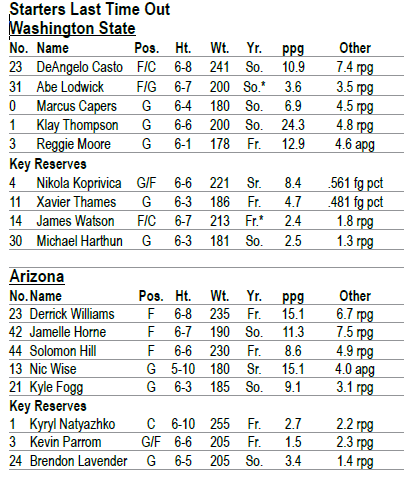 Klay Thompson, WSU: Klay had his worst game of the season against the Beavs. He played all of two possessions in the last eight minutes thanks to some really bonehead fouls. We'd love to see him bounce back this weekend.

Derrick Williams, UA: Not Nic Wise? Williams is actually using more possessions and has a higher offensive rating than Nic. He is also doing an exceptional job on the defensive glass, doesn't turn the ball over, and has a fantastic 92.6 free throw rate. Did I mention he is a freshman? The Pac 10 is down this year, but with guys like Derrick, the future is bright.

DeAngelo Casto, WSU: DeAngelo is much larger than anyone that plays significant minutes on the Arizona frontline. Look for him to have a nice night on the boards and get some second chances for the Cougs.

Nic Wise, UA: The senior leader for the Wildcats is the the go-to man in the clutch and this looks to be a tight game. He also plays 79% of the minutes, so he will assuredly have a great impact. (I've watched several Arizona games on FCS this year, get ready for the announcers to mention the fact that his the "senior leader" 6,000 times.)

The Cougars win if... they shoot well inside the arc (One of Zona's few major weaknesses on defense) and keep the Wildcats off the free throw line.

The Wildcats win if...They limit second chances for the Cougs and exploit Wazzu's less-than-stellar defensive rebounding on the other end. Arizona is generally not a good offensive rebounding team, something has to give!