Share All sharing options for: HOT COUGAR ACTION: C.J. Mizell Cares Not For Your Perfect Quarterback

There's just not much out there today for your discussion pleasure, so we'll give you this ... 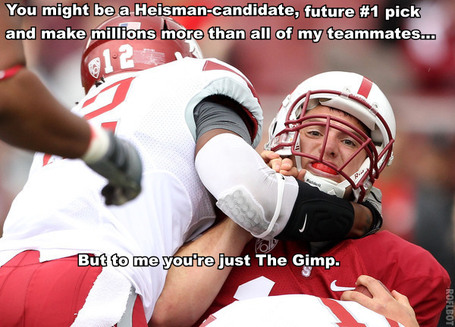 ... and then tell you go here to see the rest of CGB's Photostories. Funny, as usual.

We'll post video from Paul Wulff's weekly news conference on the site when it's available, and I'm sure there will be other stuff. I'm going to try and get another hoops profile up for you tonight.

On to the rest of the links!

Quick previews: Pac-10 Week 9 - Pac-10 Blog - ESPN
Washington State (1-7, 0-5) at Arizona State (3-4, 1-3), 7 p.m.: This is a must-win for the Sun Devils sagging bowl hopes, but the Cougars are headed to Tempe hoping for a breakthrough after steadily improving performances.

WSU heads to bubble to prepare for ASU - SportsLink - Spokesman.com - Oct. 25, 2010
Had a long chat with offensive line coach Steve Morton before practice concerning what constitutes a productive run. When we were done talking, it’s obvious there is a gap between what a fan sees and what a coach sees and, more than likely, the two will never be bridged.

Scout.com: The Early Glimpse: Cougs vs. Devils
You know the next step: a win. The first of the four final opportunities comes Saturday at Arizona State, when the Cougs and Devils kick off at 4 p.m. Pacific Time (no live TV scheduled as of Monday morning).

Cougars Head South to Face Arizona State - WASHINGTON STATE OFFICIAL ATHLETIC SITE
The Washington State University football team (1-7, 0-5) looks for its first conference win of the season as it travels to Arizona State (3-4, 1-3) at Sun Devil Stadium, Saturday (Oct. 30). Kickoff between the Cougars and Sun Devils is scheduled for 4 p.m., and there will be no live television.

Scout.com: Cougs find their left tackle
John Fullington, (6-5, 268), made his first start at left tackle on Saturday for the Cougs. Sure, the true freshman made some mistakes. So do fifth year senior All-Pac-10 left tackles. On balance, though, Fullington was nothing short of rock solid.

1000 update " Cougar Athletic Supporter
Here are a few snippets from the upcoming press release from WSUAF.

Cougars Complete First Round at Las Vegas Showdown - WASHINGTON STATE OFFICIAL ATHLETIC SITE
Sophomore Emma Betland led the Washington State University women's golf team during the first day of play Monday at the Las Vegas Collegiate Showdown, hosted by the University of Nevada, Las Vegas. As a team the Cougars finished the opening day tied for 16th in the field following a score of 309.

Cougars One Shot Back at Herb Wimberly - WASHINGTON STATE OFFICIAL ATHLETIC SITE
The Washington State men's golf team finished the first day of the Herb Wimberly Intercollegiate one stroke shy of first place. The Cougs will head into the final round Tuesday on the heals of tournament host, New Mexico State University at the par-71, 7,003-yard New Mexico State University Golf Course.

Lots of good other stuff today ...

Derek Dooley Compares Tennessee To Germany (Oops) - From Our Editors - SBNation.com
Derek Dooley knows it's rhetorically dangerous to compare a football team to the Nazis. Derek Dooley is willing to take that chance.

DEREK DOOLEY ON THE GERMANS BOMBING PEARL HARBOR - Every Day Should Be Saturday
Following up on this "story" as only EDSBS can.

THE CFB BUYERS' GUIDE: QUARTERBACKS - Every Day Should Be Saturday
This week we took a group of name-brand college quarterbacks into CU's state-of-the-art lab and rated them on everything from accuracy and arm strength to punctuality and skills with the ladies.

BCS Rankings: How Some Of This Year's Problems Will Be Fixed By Realignment - From Our Editors - SBNation.com
The second week of the BCS rankings presents several possible controversy. We look at how next year's conference realignment will eliminate some of these BCS issues.

BCS Standings: Which Undefeated Team Would Be Least Deserving Of A BCS Championship Game Berth? - From Our Editors - SBNation.com
Seven teams still have an opportunity to run the table in college football. Which would be the least deserving of a chance at a BCS title?

Notre Dame’s real ‘headaches' vs. Navy: outplayed, outcoached, outworked and outfought - Feinstein On The Brink
For years, while Notre Dame was routinely beating the Mids, all you heard from Notre Dame people was how great it was that the two schools played every year and how much they LOVED Navy. ... Now, Navy plays dirty football.

This Week In The Pac: No Foles, No Problem - California Golden Blogs
This Week In The Pac-10: Nick Foles's absence didn't stop Arizona from blowing out Oregon. Both Stanford and Oregon had relatively easy victories over Washington State and UCLA respectively.