Share All sharing options for: How WSU Can Contain The ASU Air Raid Offense (And Have A Chance To Win)

One of the funny/interesting/depressing side effects of the past two-plus years is that virtually all the football content on the site has devolved to revolving around the development of the team from week to week. This differs from virtually every other football site out there, where weekly coverage centers around the novel concept of exploring how their team is going to try and beat the following week's opponent.

I think the last time I really tried to do that for WSU was this post. Go read it, have your laugh, and then come back knowing why I haven't even really attempted it since. (If you don't remember what happened, here's your video evidence.) I mostly wrote that piece to generate discussion on our fledgling site that was only about a month old, but there was at least a part of me believing it could be true. Turns out, I was an idiot. Since then, my philosophy has been, "Why waste my time with something that's so patently absurd?"

But then UCLA, Oregon and Arizona happened, and I had a brilliant idea last week to try and write a post on how WSU could beat Stanford. We were all sort of acknowledging the doomsday scenario, but the team had shown enough signs of life over the previous month that it wasn't totally inconceivable. Besides, I thought it might be a nice, fun change of pace.

Then I realized something: It's been so long since it's been even feasible to break down an opponent, I don't even watch future opponents through that lens anymore. I actually had no idea, scheme-wise, how WSU would go about trying to beat Stanford. The best I could do was speak in gross generalities, so rather than just talk out of my arse, I didn't even bother to write the post.

Which brings me to ASU. We've looked at this game for at least a couple of weeks now as one where WSU could realistically get its first Pac-10 win since the 2008 Apple Cup. While I haven't been able to see a whole lot of ASU the last couple of weeks, the one thing we know is that they run a derivative of the Hal Mumme/Mike Leach Air Raid* offense, which is quite unique in its characteristics, perhaps more so than most other systems out there. So we can conduct a fair amount of analysis just based on examining its principles and staple plays.

*It sometimes is also spelled "Airraid," but I think that looks silly. So I'm sticking with the two-word iteration.

Here's how the Cougs should be able to limit ASU's offense and thereby give themselves a legitimate chance to win.

Earlier this week, Craig alluded to the fact WSU really ought to be able to stop Arizona State's offense this weekend. I'm not so sure I'll go as far as "stop," because, let's be honest, it feels like WSU's defense hasn't really stopped anyone in the last decade, let alone under Paul Wulff. But this defense has shown the potential at times this year to at least slow people down, and it seems to be rapidly improving each week with the infusion of young talent.

The Air Raid offense is pretty simple in what it's trying to do. Here are a few core principles:

Personnel: Lots of wide receivers - usually a minimum of four with a running back, sometimes three with two running backs. Tight ends need not apply.

Objective: To exploit pass coverage by generally using either horizontal routes at varying depths or stop/curl-type routes, while generally also sending at least one route vertical to keep the defense honest.

Despite the much-ballyhooed switch to this Air Raid offense by ASU, the Sun Devils don't run it in its purest form, if only because their pass-run ratio isn't as high as one would typically see. In pure run-pass ratio, ASU is actually nearly 50/50. However, 19 of their rushes this year were sacks, leaving 38 other carries by quarterbacks Steven Threet, Brock Osweiler and Samson Szakacsy. Although we know ASU's QBs will run at times in a designed fashion, let's assume only about a third of those runs were actually called for the quarterback. That still only raises their percentage of pass plays to just a shade under 60 percent. Compare that to Leach's final year at Texas Tech, when the Red Raiders passed on more than 70 percent of their offensive plays.

What doesn't change, though, are principles a team is going to use to try and attack defenses. Avinash Kunnath over at California Golden Blogs wrote a fantastic breakdown of the Air Raid offense here, which you can read if you want a detailed description of the principles of the offense. (He focuses it on Arizona, but it's the same stuff.) You can also get lost in this amazing page at SmartFootball.com. Basically, there are a limited number of staple plays and routes run out of different formations. (Leach once said he's only got about 25 plays.) Success relies less on a quarterback's ability to go through a progression and more on an ability to read the defense pre-snap and figure out where the weakness is going to be.

Here are six staple plays of the Air Raid: 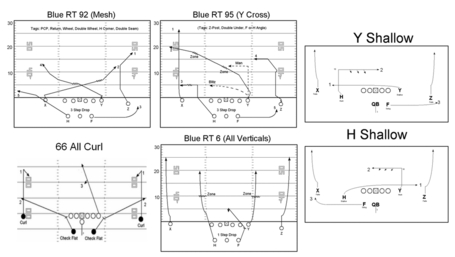 Obviously, an offense is going to run more plays than this. But these do a good job showing the various principles. If it's man-to-man coverage, you're going to see them use their crossing routes designed to outrun slower defenders to put pressure on the defense horizontally (Mesh, Y Cross, Y Shallow, H Shallow). If it's zone, they'll break those off and try to sit in gaps in the zone. Or they'll try and put extreme pressure on the defense vertically -- either all verticals or all curls. Sometimes, it's a combination of the two, as in the smash concept, where the goal is to get the defense to pick one (either deep or short) to cover, leaving the other exposed.

One thing this offense doesn't always do is get the ball out of the hand of the quarterback quickly, as some of these routes can take time to develop. The Air Raid does mix in a healthy dose of screens, but it's not fundamentally designed to get the ball out to the playmakers in space, as a typical spread offense would. Hence, the 19 sacks Arizona State has taken this year, tied with Arizona and UCLA. Only WSU has allowed more.

And I think therein lies the rub for WSU. The key will be generating pressure on the quarterback quickly, as WSU showed an ability to do against Arizona. The Cougs had six sacks against the Wildcats, and most of them were not of the coverage variety. WSU brought pressure from all sorts of locations against both Nick Foles and Matt Scott. They were able to confuse a reasonably experienced offensive line and either get a sack or force an early throw. The Cougs should be able to do much of the same against an ASU team that has allowed those 19 sacks despite two of their games coming against FCS competition. Throw in the fact that their starting QB is playing with a concussion and will likely be hyper sensitive to contact, and there's reason to believe WSU should be able to do some things on this front.

However, if the Cougs focus too much on the pass, they run the risk of being gashed in the run game. As noted earlier, the Sun Devils run it more than the typical Air Raid offense, even rushing the ball 51(!) times against Oregon State. They've been about 50/50 their past two games. The Cougs' run defense woes have been well documented, but that aspect of the game has steadily gotten better as the year has gone on. C.J. Mizell and Sekope Kaufusi both continue to mature, as does the depth in the interior defensive line. Since the debacle against UCLA, this team has allowed 6.3 yards per carry to Oregon (the Ducks are at 6.56 on the season), 3.02 to Arizona (4.24 on the season) and 5.30 to Stanford (5.34 on the season).

That number against Arizona is significant, given the similarities in offensive style. The Cougs won't be facing the power styles of UCLA or Stanford, or the sheer spread-it-out speed of Oregon. Beyond that, this is an ASU team that is under four yards a carry on the season, and the interesting thing is that while they've seemed to make a concerted effort over the past month to run the ball, it's been ineffective: just 3.16, 2.68 and 2.11 yards per carry against Oregon State, UW and Cal, respectively. Yes, they've given up some sacks that take away from the totals, but those numbers are WSU bad -- especially when you consider they couldn't do more against a Washington defense allowing better than 5.0 yards a carry on the season.

In short, stopping the ASU rushing attack shouldn't be a monumental task for the Cougs, as long as they don't have one of those miss-20-tackles games.

I know people are sort of backing off the idea that the Cougs can go down to Tempe and come back with a win -- ASU is fighting for the bowl lives, they're smarting from getting smacked around by Cal, they've played with Wisconsin and Oregon ... blah, blah, blah. But I keep coming back to one idea.

I just don't see how this offense is going to drop five TDs on WSU.

Yeah, we're a little banged up in the secondary, but not much more so than we were against Arizona. And is there anyone here who thinks ASU's offense is better than Arizona's, even though it was at the hands of a backup QB? If we can hold Arizona to 24, that's certainly a reasonable expectation for this game against a team that's worse at virtually every skill position than the Wildcats.

I truly believe this isn't just one of those "we have a shot to win because ASU just happens to be one of the less good teams in the Pac-10" kinds of games. This is the kind of game we have a shot to win because we legitimately match up well with them and have demonstrated an ability to slow down a similar, but superior, team. It's not going to take a fluke miracle to win this one.

Play sound run defense, get pressure on the quarterback, tackle well in the secondary on all those crossing routes -- all things that are doable -- and the Cougs will be in a great position to win this ballgame.