An Observation And A Question Before WSU Vs. ASU

Share All sharing options for: An Observation And A Question Before WSU Vs. ASU

A few days ago, Vince Grippi noted that there's so much optimism surrounding this game that he wondered what might happen if the team came out and laid an egg today. I bring it up because I think a couple of highly unscientific polls we've conducted here demonstrate the fickle nature of fans. (Although, to be fair, I think these polls also show that WSU fans are a lot less fickle than some other fans.)

A month ago, after the loss to USC, we asked this question: 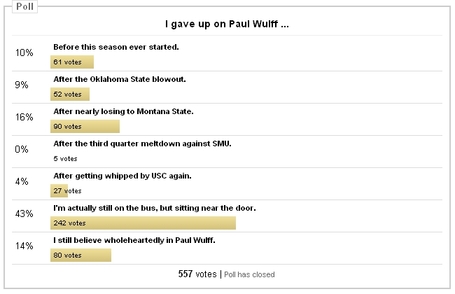 You'll note that only 14 percent said they "still believe wholeheartedly in Paul Wulff." However, when you add in the "sitting near the door" crowd, about 57 percent believe he should still be the coach going forward.

Now, here's our poll from earlier this week after Bud Withers wrote his column advocating for Wulff's return after this season (screen captured this morning):

A full 55 percent want a guarantee that Wulff will be back in 2011. Only 5 percent want him replaced, no matter what; compare that to about 40 percent of respondents a month ago who indicated they "gave up" on Wulff at some time up until that point.

Looks like some people have changed their minds. Will they change their minds again if they're disappointed today?