This is the latest in our series of WSU basketball player profiles, a new one of which is hitting the site periodically early in the basketball season. You can read the other players' profiles here.

Scouting Report: As we all know, it was a tale of two seasons in 2009-10 for Klay Thompson. He burst onto the season in the nonconference portion of the schedule, far exceeding any modest expectations for improvement most of us had. Thompson was solid as a freshman, but there was very little to suggest that this sort of outburst was on the horizon.

He torched opponents with not just that devastating jump shot, but also with an aggressive mentality to the rim. After shooting an almost comically low amount of free throws as a freshman (just 31 all year) he ended up increasing his free throw rate from an insanely low 8.2 to a decidedly average 34.2. In the process, he got the college basketball world buzzing. (Klay Thompson! Did you know he's the son of former No. 1 pick Mychal Thompson? No, for real!) We were even starting to wonder if we might be losing him to the NBA after last year.

But it's a long season, and a couple of factors worked against Thompson in terms of sustaining his success. First, the nonconference schedule was much weaker than most of us realized at the time. When Pac-10 play started, he faced much better defenders than he had in the first two months. Second, those superior defenders had a lot of game film to work with, and the book started to circulate. It went something like this.

Thompson wore down both physically from the added attention and mentally from the inability to continue his previous success, and he went into the kind of slump none of us really thought was possible. The worst part was that the offense was so reliant on Thompson, any chance the Cougs had to squeeze into the postseason went down with him. Check out how the Cougs' offensive efficiency (points per possession) on the season mirrored Thompson's offensive rating (a measure of individual efficiency). Both are on a scale where 100 is average: 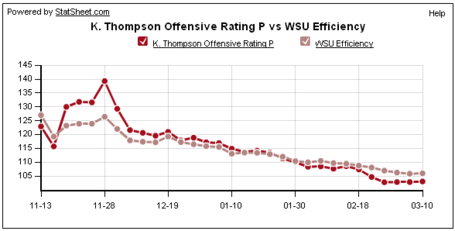 The question is simple: Is Klay Thompson ready to come back better than last year? Is he ready -- both physically and mentally -- to lead the Cougs back into the NCAA Tournament? Is the body stronger? Can he dribble in traffic? Will he find open teammates when the situation calls for it, rather than forcing poor shots?

It's not totally unreasonable to think that Thompson could improve as much from last year to this as he did from is first year to his second. He's an incredibly focused individual, and a perfectionist when working on his game. He should be prepared for whatever defenses will throw at him this year. And the likelihood that he goes through another prolonged shooting slump is somewhere between slim and none.

Best Case Scenario: Thompson really has gotten that much better. He's diversified his skill set, and he's made himself into the premier player in the Pac-10: 24 points, 4 rebounds and 3 assists. He's an All-American and he heads to the NBA.

Worst Case Scenario: He's pretty much the same player. Still not strong enough, handles not good enough. Worse yet, his mental makeup hasn't improved. He has another up-and-down season.

Likely Scenario: Thompson is improved, and his numbers go up across the board. However, there are still some notable weaknesses -- not devastating weaknesses, but weaknesses that show he's still not quite ready for primetime. He's an all-Pac-10 first teamer and borderline All-American. He sticks around for his senior year.