Cougar Uni Watch: What the Cougs Should Look Like

Tonight, the Huskies debuted black uniforms. There was much speculation surrounding them, but one thing was for certain: they were going to be awful. Purple and Gold look bad enough on their own. Purple and gold - and black - look even worse.

Fortunately, Paul Wulff - fresh off the heels of the Cougs' incredible road win at Oregon State - made his own uniform announcement Wednesday night on his radio show.

The announcement being that WSU will be sporting new football uniforms in 2011.

This is good news, I guess. Our current uniforms are sleek, and they've been growing on me, but they suffer from one very annoying problem: ugly sleeve bars. These are really the only issue I have with our uniforms, and it's mainly apparent on linemen and defensive players. Players like quarterbacks get full sleeves, and those don't look so bad.

Still, it could be better. You could turn on your TV and, from afar, the casual fan would have a hard time differentiating us from Stanford, or Ohio State, or Oklahoma. There's nothing unique about these jerseys, and because of that I advocated a full time return to the Gesser era jerseys earlier this summer. However, after hearing from like-minded Coug fans on our site and elsewhere, I've found there's a consensus that those really weren't the greatest things on Earth. Mainly, our attachment to them comes in the fact we won games in them.

The more intriguing thing about the upcoming change is that it appears to be part of a bigger 'rebranding' of WSU. Don't worry, we're not replacing the Coug head logo with our own Turbo Dawg (although I wouldn't put it past Nike to give us a secondary logo). There is, however, a very good chance we'll get a new 'Washington State' typefont (we currently have no standard for that), and possibly our own unique number font for the uniforms. I've been pushing for that sort of thing for a while.

However, it's a double-edged sword. We really have to hope this is a change for the University that looks good. A rebranding means you can probably expect all WSU sports teams - not just football - to be sporting new jerseys for 2011 or beyond. Therefore, if our football uniforms look bad, there's a very good chance our basketball, baseball - even our fringe sports uniforms - would follow suit.

Now, I have no artistic ability. This is 100% the reason why I am a Pharmacist today and not an Architect, my original major at WSU (I did pass a 300 level construction materials and design class, though, which I like to brag about). Fortunately, for people like me EA sports offers their TeamBuilder, which allows even the most artistically challenged people to make up their own schools and/or uniform designs.

Read on for my creations... including a black alternate that isn't ugly.

First, some things I consider when going after what the Cougs should look like (side note: they should really let me have a high-level marketing position somewhere):

1. Keep it simple - Throwing too many needless features on uniforms is a surefire way to fail. What's the difference between this and this? One is a lot simpler, and even though the core design is the same, it makes a world of difference. One of those is a convoluted sports-bra look, while the other is one of the best looks in college football.

2. Make it unique - A casual college football fan in Columbia, South Carolina needs to turn on the TV, and within a few seconds recognize that the team playing is WSU. Not Stanford, not Oklahoma, not Ohio State, not Mississippi State. Simplicity is cool and all, but you can't go overboard, unless you've been doing it for a bazillion years. WSU isn't an old school power; our best years have come in the last two decades. Therefore we can afford to get a little more modern than Penn State and Nebraska.

3. Try to make it classic - Blue jeans have been around for ever. Zubaz pants not so much. It's hard to create a timeless look, but it can be done. Fads come and go. And fads will usually look stupid in 20 years.

You might like these designs, you might not. Either way, I'm throwing 'em out there. Also, consider this my legal disclaimer for WSU being allowed to use these designs without me suing them later for royalties. Although if the Cougs go with something like this, I would like a free jersey as a reward. Take note, Bill. 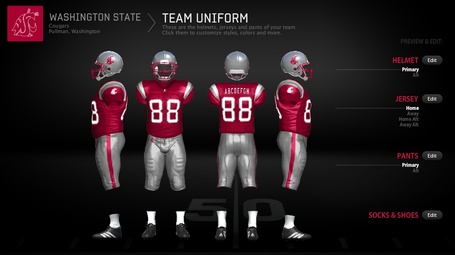 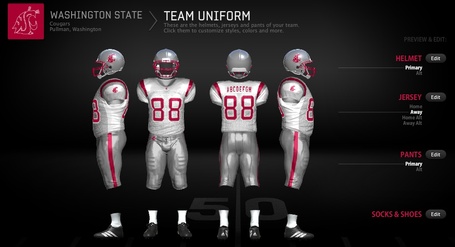 I always prefer the gray-white-gray look on the road. I would, ideally, have them still say "Washington State" across the front, but TeamBuilder doesn't give you the option. 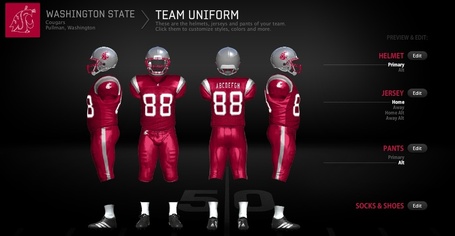 If you miss the monochrome crimson, this is for you. 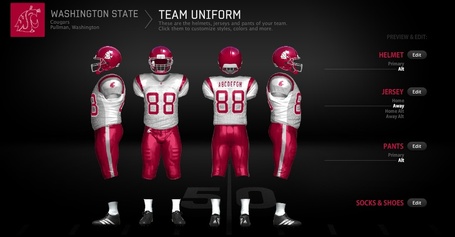 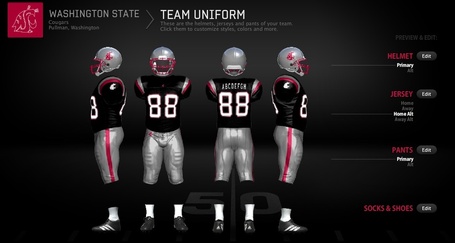 Deal with it, Sark.

P.S. If you all are really nice I may take the time to make them available for download on XBox 360.