PAC-12 SCHEDULE: Opponents Will Be On A Two-Year Cycle

Share All sharing options for: PAC-12 SCHEDULE: Opponents Will Be On A Two-Year Cycle

I wasn't going to break this out in its own post, but the Pac-10/Pac-12 was so gracious as to post a graphic displaying the conference opponent rotations for the next eight years. It's going to be done two-year cycles: 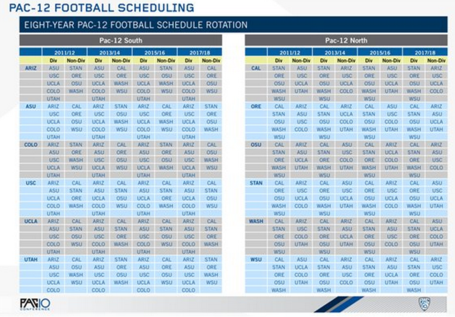 It's hard to see, but you can click on the image for a larger view. Here's what it means for the northwest schools, including WSU.

First, we'll play USC and UCLA four times each, alternating every two year period. We can assume since we play UCLA at home next year, it'll probably continue to alternate home and away with the Los Angeles schools:

Additionally, the Cougs will play each of the other four schools in the Pac-12 South six times each. When a school is out of WSU's rotation, we won't see them for two years. Here's how it breaks down:

If you want to see what next year's composite schedule looks like, you can view that here.