The WSU Cougars play in their first nationally televised tournament -- the Diamond Head Classic in Honolulu, Hawaii -- for the first time in quite a while, and CougCenter is going to be your source for everything related to the tourney over the next week.

Here's a quick overview of the particulars of the tournament before we launch into our team capsules. We'll also have a complete television schedule up a bit later.

What: A single-elimination tournament with a consolation bracket.

Where: Stan Sheriff Center in Honolulu, Hawaii on the campus of the University of Hawaii

Prospectus: Baylor would have to be considered the favorite, given its lofty ranking (which, of course, took a bit of a hit with the Bears' loss to Gonzaga on Saturday). Butler, Florida State and WSU are all in a group that you'd likely consider the other contenders -- all three are ranked between 32 and 39 by Ken Pomeroy. Mississippi State and Utah would be considered dark horses, while Hawaii and San Diego are long shots.

We'll have TV times and stations later today. But you can view the complete bracket after the jump. 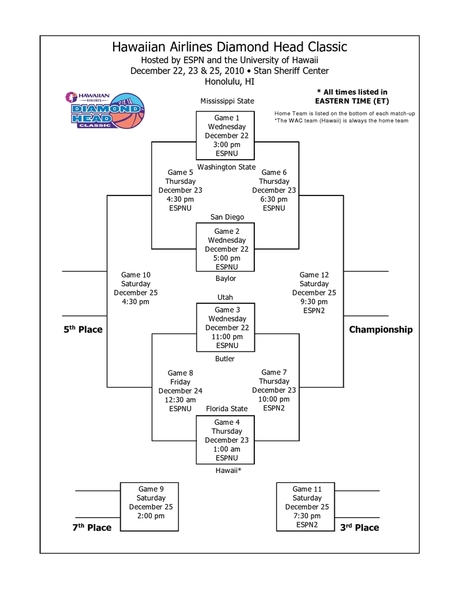