I have never been to any Pac-10 basketball court other than WSU's Friel Court, but I have always wondered how the other places the team plays compare when the student section really gets rocking. Where is the toughest place to play in the Pac-10, independent of how good the home team is? Fortunately the home-and-away round-robin scheduling of the Pac-10 gives a unique situation to answer this question. As WSU plays each Pac-10 team both at Friel and on their own court in the same year with the same players and coaches we can use home performances as a baseline to judge away performances that same year. This allows us to take out the influence of how good a given team is and look at just the impact of playing in their court. Although in any given year random factors such as injuries and fatigue on young teams as the season wears on can cause skewed results, looking at the consistent trends over an extended period of time can give us a glimpse at the courts in which it is harder to play.

To get at this question I grabbed the last 11 years of conference games. After a bit of playing around with the data I decided that the best way to look at this was to use margin of victory. I chose this because it 1) is the stat that ultimately determines if a team wins or loses, 2) appears to be pretty tempo-neutral (a bit more on this later) and 3) is pretty easy to get. To arrive a general metric of how the Cougs performed in each venue I took the away margin of victory less the home margin of victory, something I will call "Net Margin of Victory" (NMV) for the rest of the post. An increasingly negative NMV indicates increasingly poor performance in a venue as compared to the home performance, and a positive NMV would indicate a better performance in a given venue than at home. For example last year versus UW our margin of victory at home was -7 (a 7 point loss), and our margin of victory at Hec Ed was -28. Therefore our NMV in Hec Ed for last season was -21, or WSU did 21 points worse in Seattle.

About a week ago I asked CougCenter readers what their impression was of the toughest place in the Pac-10 for the Cougs to play. As of the night of Dec 21st UCLA's Pauley Pavilion far and away has the most votes (37) more than doubling the second place choice: UW's Hec Edmundson Pavilion (18), followed by Arizona's McKale Center (10) and Oregon's McArthur Court (8). The only venue to garner not a single vote was ASU's Wells Fargo Arena.

So what do the numbers have to tell us? 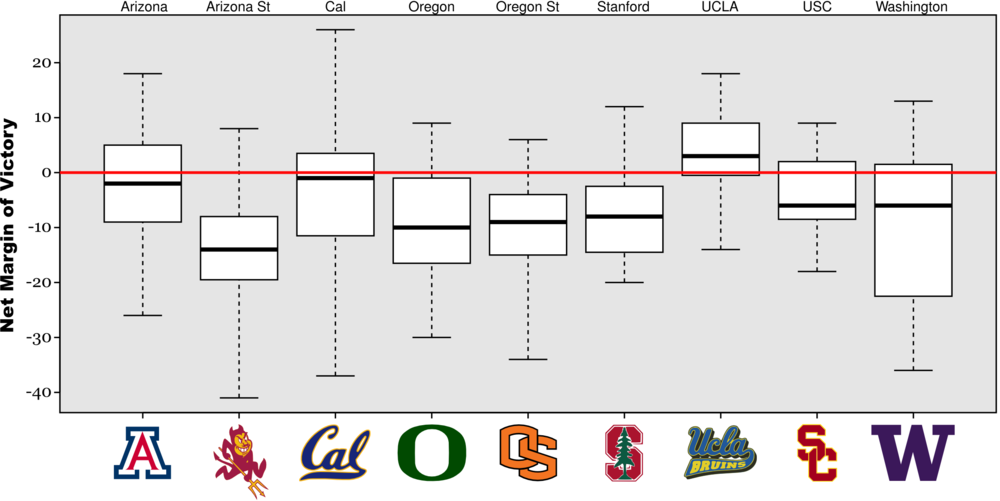 The popular perception could scarcely be more diametrically opposed to the results. Pauley Pavilion actually appears to be the most favorable road environment for the Cougars; the only venue in the Pac-10 with an average net margin of victory above 0 (averaging 3.36). Eight of the last eleven years we have played UCLA better in Pauley than in Friel. No doubt the supremacy of UCLA in Pac-10 basketball (with a few stumbles here and there) over recent memory has contributed to the notion that Pauley is a house of horrors for visiting squads, but that perception evaporates when we try to control for the dominance of UCLA as a basketball team in each of those years.

In contrast Arizona State has been an up and down team the last decade, finishing anywhere from tenth to second in the Pac-10, but from my perception never being the kind of team that really strikes fear into the hearts of opponents, and definitely not having the mystique surrounding a program like UCLA. However, Wells Fargo Arena seems to be where the Cougs perform the worst, only twice in the last eleven years have we done as well or in Tempe as in Pullman. Additionally ASU has handed the Cougs their worst NMV of any conference opponent the last 11 years, a 96-45 shellacking in at Wells Fargo and a 81-71 loss at Friel in 2002, good for a -41 NMV. So those of you that have been there, do you have any explanation why Tempe does such bad things to the Cougars? I would love to hear your ideas.

Just for anyone who is interested here is the average NMV at each location:

For the stats geeks (on margin of victory being tempo-neutral): As I was decided how to carry out this analysis I wanted to make sure whatever metric I was using would be relatively tempo-neutral. I could imagine margin of victory being either way: having no relationship to tempo or margins tending to get larger as tempo increased. One could run a simple correlation test to see if the two correlate and to what degree, but this really is the wrong approach because it considers those two factors in isolation, when really many factors will play into final margin of victory. A more appropriate method would be to fit a stepwise linear model, and find the significance and magnitude of each predictor. This way tempo is not considered in isolation. When I did this analysis the number of possessions in a ball game was a significant predictor of the margin of victory but less significant than a teams’ adjust offensive efficiency on the year, adjusted defensive efficiency on the year, a team’s final Pomeroy ranking that year, and the location. This is encouraging for two reasons: tempo, although a significant predictor of margin of victory, is barely significant and is an extremely weak predictor. Secondly location (Home vs. Away) was a far more significant and strong predictor in the same analysis, suggesting the analysis done here is likely to be a genuine phenomenon and not an artifact of tempo.

Edit: One thing that really annoys me at times about sports statisticians is their tendency not to pay due diligence to ensure the data they are interpreting isn't simply noise, and/or not reporting that to the audience. My sin is failing to report, although it is likely pretty dry anyhow. An ANOVA performed on the data just a hair short of being technically significant at a p-value of 5.4%. It was close enough I didn't feel too out of line in proceeding to the post-hoc test, which revealed the only significant differences between ASU and UCLA. All other venue's variation in NMV falls within the range likely explainable by simple random variation, therefore not worth addressing.