The Coverage: No TV. Find your local radio station here. Audio also available for a fee at wsucougars.com. 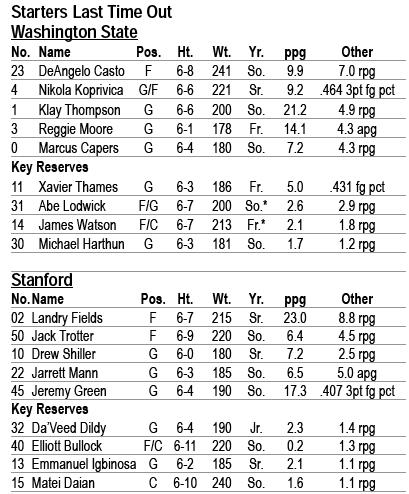 Four Factors
Shooting: WSU. While both teams rank very low in defensive eFg%, the Cougs are much better in the offensive eFG% category. Look for them to have a nice day from the floor.

Free Throws: WSU. This isn't even close. WSU is 11th in the country in free throw rate. Stanford is 200th and to make things worse, is 214th in FTR allowed. With the advantages the Cougs have in the first three factors, I fully expect this to be a nice offensive night. How does Stanford keep up?

Turnovers: Stanford. This is how. They do not give the ball up, 39th in the country in turnover percentage. WSU has been unable to turn teams over (243 in defensive TO%) and we all know how they can be prone to giving the ball away.

Take care of the basketball! The Cougs have the clear advantage in all the other factors, but they Stanford could easily come away with the win is WSU shoots themselves in the foot. If WSU hold on to the ball, they will have easy scoring opportunities. On defense, get a hand in Jeremy Green's face, he has killed teams all season long from the outside.

Individually, Klay Thompson needs to continue to be more selective and look to find the open guy when the defense collapses on him. DeAngelo Casto and Brock Motum may have nice days again, as Stanford is very thin inside. Reggie Moore needs to attack the rim and get Stanford's guards in foul trouble.

This is a game WSU should win, but they need to come out and play for more than one half.