And now, a CougCenter public service announcement from Nuss.

So, in the wake of our little refocusing of community standards at the beginning of the week, there were a number of questions about what is and is not acceptable on a game thread. Let's bring some clarity to that before the game breakdown.

First off, we recognize game threads are a different animal. Emotions play a large role in the watching of games, as they should -- it's why we watch in the first place, obviously. So to expect those emotions to not come out as the game unfolds in the game thread isn't reasonable. People get excited, people get pissed, and it's all good ... if done correctly.

Contrary to what some people seem to believe, it is possible, in fact, to vent and move the conversation forward at that same time. And that's our expectation.

I guess the best way I can put it is like this: Participating in the CougCenter game thread should be like sitting in a big living room with the smartest fans you've ever met and watching the game with them. While it's OK to have emotional outbursts from time to time, nobody wants to hang out with the guy who constantly talks trash about the players, coaches, refs and repeats his criticisms ad nauseam. First of all, it's obnoxious, and nobody likes obnoxious people. Second of all, a smart fan doesn't do that.

So, don't be that obnoxious guy on the game thread, OK? If you came to my house and acted that way, you wouldn't be invited back. If you do it on our game thread, a similar penalty awaits.

The Place: Friel Court at Beasley Coliseum, which shall henceforth be known as "The House That Sterk Painted"

The Coverage: FSN, FCS Pacific. Find your local radio station here. Audio for a fee at wsucougars.com. Post stream links in the comments. 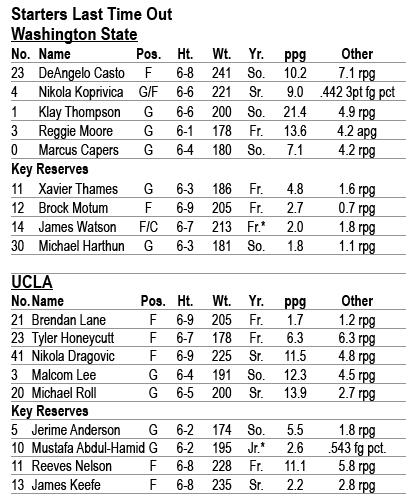 UCLA's biggest defensive weakness is opponent three point percentage. The Cougs need Klay to duplicate his performance from the Cal game from the outside. UCLA is not great at forcing turnovers, so the opportunities should be there if the Cougs avoid careless passes and dribbling into crowds.

On the defensive end, the intensity has to improve over the last effort against UCLA, especially on switches. Reeves Nelson had his own personal dunk contest last time out, largely because the Cougs were rotating very poorly. They need to put forth a better effort tonight.

Also, I wouldn't mind if Nikola Dragovic sat out for some reason. He's having a bad season, but we know that doesn't matter when he's playing the Cougs.