The Place: FRIEL THE HEAT!

The Coverage: Since all the Pac 10 games start at 7:00 or 7:30, someone has to be left out of the TV fun. Guess who? Find your local radio station here. Audio is available for a fee at wsucougars.com.

KenPom also says: You smell, go take a shower (KenPom tells it like it is). 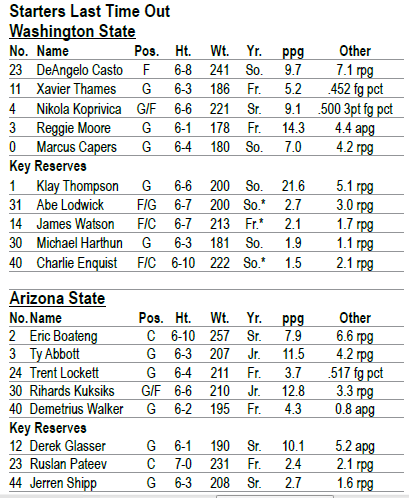 Well, the first half of the Pac 10 season is over and you know that that means. I'm not going to do the "Players to Watch" and "X-Factors" segments of the game thread. You folks know who the important guys are for the Cougs, and I'm sure I would end up using the same players again for the opponents. Instead I will provide you with my estimation on who has the advantage in each of the four factors and the keys for a Cougar victory.

Shooting: Arizona State. The Sun Devils are 20th in the country in eFG% and 39th in opponents eFG%. They have a huge advantage here.

Rebounding: Washington State. The Cougs are an excellent offensive rebounding team (66th in the country in OR%) and the ASU zone should provide ample opportunity.

Free Throws: Washington State. WSU is clearly the better team in this category. They are 15th in the country in free throw rate and are better than ASU at limited opponent's free throw chances. The big question is, can they do it against a zone?

Turnovers: Arizona State. ASU is 63rd nationally in TO% and 51st in opponents TO%. The Cougs? They give the ball away quite a bit and struggle to force turnovers.

WSU must play to its strengths, free throws and offensive rebounding. They will absolutely have chances at offensive rebounds and they need to capitalize. One of ASU's few weaknesses is free throw rate. If the Cougs can get to the line, they can make up for their huge deficit in shooting. On the flip side, turnovers can absolutely kill them tonight. You can bet the Sun Devils will take care of the ball, so the Cougs need to do the same of they want to have a chance.

We've seen time and time again this season that Wazzu has no clue what to do when faced with a zone defense. That has to change tonight, or they may find themselves on the losing end of a blowout once again.