Our defense stinks, and there's a clear reason why

Share All sharing options for: Our defense stinks, and there's a clear reason why

It's said that great minds think alike, and while I'm not sure if thinking alike makes great minds or the other way around, I can tell you this: After about one minute of looking at last night's box score, I had the exact same take on the game as Grady.

I didn't follow the game live because yesterday was my beautiful wife's birthday and I'm not (generally) a stupid man, so I waited until just before heading to bed to sneak a peek at the final stats. Probably like most of you, my eye initially gravitated toward Klay Thompson's line, which was again awful. "Dangit ... lost another game because of Klay's shooting."

But then I caught myself. "Wait a second ... 81 points? From ASU?" I hadn't calculated possessions yet, but ASU games almost always end up under 65 possessions. You don't have to be a math wiz or Ken Pomeroy disciple to know that's way more than 1.0 points per possession (which, of course, is an average defensive performance).

Turns out, the game was played at 68 possessions, which worked out to 1.19 points per possession -- not as bad as I first thought, but still patently terrible. And I think that's the rub. Sure we can talk about the shooting as much as we want, but until this team learns to start playing some defense, it's going to be facing an amazingly uphill battle every game. I mean, if you're counting on over 51 effective FG percentage to win -- we're 4-1 in Pac-10 games over that mark and 0-5 in games under it -- well, you're going to have a lot of long nights.

Grady pointed out our overall ranking in the conference in defense, but I want to illustrate it to you in a little different way. Check out each opponent's offensive performance against us, and how it compares to their overall offensive efficiency in Pac-10 play: 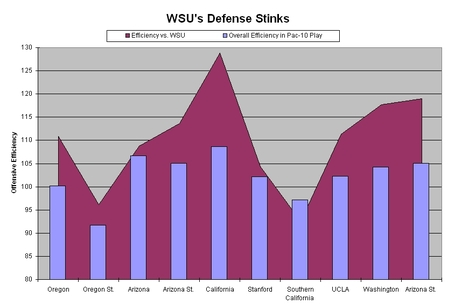 You can see a full-size graph here, but you don't need to look at it all that closely to know we're playing some bad, bad, bad defense. Basically, every team is experiencing better- to much-better results against our defense, as only once in 10 tries have we held an opponent below their overall Pac-10 mark.

How to explain it?

Well, one thing I know about myself is that I'm not a big X's and O's guy, although I do hope to get better at that as time rolls on. But I've watched enough basketball over the years that I can identify some of the characteristics of great defenses.

One of the things that struck me on Saturday watching the UW game was just how much of that 2-3 zone we played, and just how gawd-awful it is. You can read up on the principles of a zone here, but basically I saw a bunch of guys who didn't communicate well, got too far out of their zone to the point that they couldn't recover on the heels of a good pass, and didn't keep their hands in the passing lanes.

It was the sort of performance that made me long for ... well, you know.

It wasn't so much my disdain for the zone -- which I do have -- that made me feel that way. (You can listen to my thoughts on the zone defense here; it's in the second half of the show.) It was more that they weren't very good at it -- certainly not good enough at it to play it for three quarters of the game. It just looked amateurish, the sort of junk that any half-decent team will figure out if you give them enough time, as UW (and UCLA the weekend before) eventually did.

Fast forward to last night. I didn't see the game, but Grady did, and he told me they played very little (if any, he couldn't remember for sure) zone. It was all man-to-man. Yet, the results were the same.

Which leads me to my point. There was a fear early in the year that getting away from pack-line defense would be our demise. I countered with the idea that our defense would be different, and probably look worse, but that it would be a net gain in the end because of our increased offensive output. The idea is this: There are a lot of ways to play defense -- the Bennett pack-line defense, the Romar ball-pressure defense, the Boeheim/Sendek matchup zone -- and virtually all of them have merit.

Dick Bennett would have died before he played anything other than that pack-line defense, and by golly his guys are going to sell out to execute its man-to-man principles -- or find somewhere else to play. Lorenzo Romar would rather quit coaching than play pack-line, because he wants his team to run. So they pressure the ball -- relentlessly. Jim Boeheim recruits players specifically to make his 2-3 matchup zone come alive. And they all work, because their players believe in the system. The know it like it's second nature. They play it with conviction.

We, on the other hand, have no defensive identity. And with no identity, there is no commitment or conviction.

And without commitment and conviction, there is no defense.

Which is what we have right now.

We play a crappy 2-3 zone part of the time, a ball-pressure defense part of the time, a modified pack-line part of the time ... and aren't good at any of it. We are the proverbial "jack of all trades, master of none." Guys don't sell out to be in the right spot because of that split second of indecision caused from the constant mixing of defenses. And when it comes time to make a critical stop, we can't do it.

I have no problem with throwing different looks at different teams occasionally, and in fact loved Bone's zone when it was first deployed. Seemed like a great strategic move at the time, the sort that we never saw out of Tony Bennett. But that was when I thought it was going to be an occasional thing, not a staple. This constant mixing of defenses is a big reason I think this team seems to be regressing, rather than progressing.

It's time for the mixing of defenses for extended possessions to stop. Granted, it's going to be tough to make any kind of move in that direction at this point; with 22 games down and about 10 to go, it's awful late to change things up. But the reality is, we're getting absolutely killed with what we're doing, so there's really nothing to lose. There are 10 games left to try and get this team ready to make a run in the Pac-10 tournament, and the goal at this point should be to get this team ready for that -- wins or losses along the way be darned.

So coach, to you I say: Pick your ideal defense and stick with it. Get your players to sell out for it. If it doesn't work over the final 10, oh well -- any chance you had of making the NCAA's as an at-large team is likely already gone, anyway. Maybe you take a couple of lumps along the way, but maybe you end up playing great ball by the beginning of March and you're poised to make a run in a Pac-10 tournament that can be won by anyone. That potential is there with this crew.

It could backfire, no doubt. This team could get worse and get bounced in the opening round of the Pac-10 tournament. However, worst case scenario, you've now instilled a philosophy and belief system that will carry over with a team that will return virtually intact next year. You're now 10 games ahead of next year's curve.

Maybe you want to use another defense. Fine. But please, whatever you do from here on out ... do it with some gosh darned conviction.