Share All sharing options for: BRACKET CHALLENGE: Round 2 standings

There were a lot of us feeling pretty good after the first round. Most of those people weren't feeling that way after Kansas crapped itself against Northern Iowa. As I said on the thread at the time, there were a lot of scenarios where I could see Kansas having a tough time getting out of that region. None of those scenarios involved Northern Iowa.

A visual representation of just how many of us now have nothing more than a miniscule chance of winning this thing: 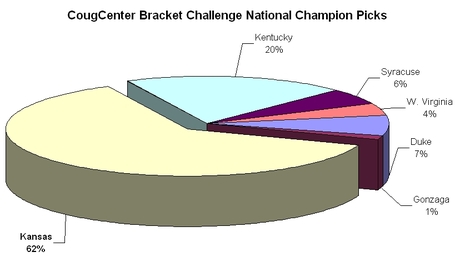 In that spirit, I'm going to give you two different sets of standings. The first is the actual standings after two rounds:

That's right: We're all getting beat by the wife of 02Coug, who -- according to her husband -- has no clue what she's doing. That's how these things work, right?

The second set of standings is the top 10 people with the highest potential scores. This is where those of us that lost Kansas can kiss our chances of winning this thing goodbye:

Good luck to those of you who, unlike all three authors, aren't already screwed. Full current standings after the jump.