Why I'll be cheering ridiculously hard for Northern Iowa

Share All sharing options for: Why I'll be cheering ridiculously hard for Northern Iowa

So, it's been casually mentioned in the comments a few times, but in case you didn't know: Northern Iowa's Ali Farokhmanesh -- he of the balls-of-steel 3-pointer against Kansas -- is the son of former longtime WSU volleyball coach Cindy Fredrick and her husband/assistant coach Mashallah Farokhmanesh. I only discovered this like two days ago, which made me feel simultaneously thrilled and silly.

In fact, Ali Farokhmanesh spent most of his life in Pullman before Fredrick left in 2003 after 15 years at WSU to coach Iowa, and he said in an interview with Scott Van Pelt the other day that he used to babysit Robb Akey's kids. All of a sudden, the memories of watching his parents coach during the previous glory days of WSU volleyball when I was in school came flooding back to me.

Given all that, I hereby declare that Ali Farokhmanesh is one of ours, and that we shall duly cheer Northern Iowa as if a Coug was participating. Who's with me?

If you want to read more about him, here's a good story for you. You also can listen to that SVP interview here.

And you can also listen to him on with Dan Patrick here:

Oh, and it doesn't hurt that he's now an SI cover boy: 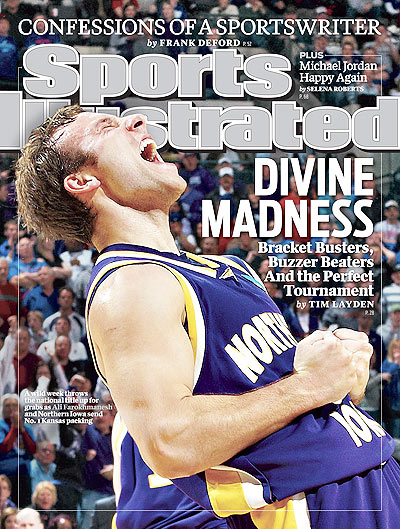