Share All sharing options for: SPRING FOOTBALL: Heading towards the Spring game

With the Spring game on the horizon, it's time to look at the team to see what we've learned so far this Spring.  As with any set of practices, the Spring has had ups and downs, with some practices being intense and others slogging along.  Certain players and positions have stood out, while others have been less than adequate.  As with any Spring, it's still important to remember that the Cougs are practicing against themselves.  It's hard to draw many conclusions about how they'll perform during the season from a set of 15 practices.

As a side note, I'm in Pullman right now and will be at the Spring game on Saturday at 5:30 PM.  I'll have a practice report using my own eyes, instead of relying on others, along with a few other things.  The spring game should be more of a controlled scrimmage, it seems, than a real game.  Due to the injuries, especially on the offensive end, the team doesn't have the bodies to run a full-on game again this year.  There will be field goals and extra points if needed (yay!), but no other special teams play.  It will be a first team vs second team type game, although the offense is really just one big clump of players after all the injuries.  Finally, if you're in the Spokane area, the game will be televised on SWX, the sports station run by KHQ.

After the jump, we're going in depth and doing so position by position.

Defense:  The defense were the stars of the show most of the Spring.  As expected, this is a group of talented young guys with some veteran leadership.  There didn't seem to be a practice they "lost" throughout the Spring.

Defensive Line:  A position that seemed to be a weakness going in to Spring, due to lack of depth, has actually been a strong suit.  Brandon Rankin continues to be a force inside, and may be sliding back and forth between tackle and end when needed.  Travis Long is picking up where he left off, continuing to be a disruptive force on the defensive line.  Kevin Kooyman is a strong point of the line, as well, with Todd Sturdy going so far as to say "We're a different defense when he's out there".  Bernard Wolfgramm, if he can stay healthy, also brings good gap control to the defense.  If any of these guys goes down, we may be in trouble.  Their backups have gotten some experience, but the talent drop off is still fairly substantial.

Linebackers:  Unlike the defensive line, the linebackers have depth to go along with their talent.  Some key injuries have allowed the backups to shine during the Spring.  With Louis Bland still out, Hallston Higgins has stepped up to the plate and should find himself in the rotation.  Alex Hoffman-Ellis has also missed time due to injury and Andre Barrington has been quietly having himself a nice spring.  Mike Ledgerwood has also been playing well in Bland's absence and Arthur Burns adds more speed to the linebacking corp, being a converted running back.  Even though the top-end guys have been injured, the reserves have stepped up and should be ready to go if needed this fall.  Add in C.J. Mizell this spring and we're talking about a deep and talent group.

Defensive Backfield: Competition is the word to describe how the defensive backfield's Spring.  This is another deep group that has a ton of young talent.  At the safety spot, the most intriguing for me,  Jamal Atofau, Casey Locker, and perhaps Anthony Carpenter are going to be fun to watch in the coming years.  They fly around and hit hard back at the safety spot.  LeAndre Daniels and Tyree Toomer also have their moments and have been steady contributors.  At the cornerback spot, Daniel Simmons, Terrence Hayward, Nolan Washington and Aire Justin all seem to be capable and have been competing for starting spots.  Chima Nwachukwu is the elder statesmen of the group and is the only senior that saw playing time in the defensive backfield this Spring.  The youth of the unit and how well they've been playing should get you excited for the future.

Offense:  It hasn't been the best Spring for the offense so far.  Although they've been working to progress, the injuries haven't helped them at all.  The lack of depth at wide receiver means we'll be playing this game all over again in the Fall as the quarterbacks get accustomed to new receivers.  The offensive line absolutely has to stay healthy in order for us to be any kind of consistent.  Finally, the running backs need to step up, and having James Montgomery healthy may just do that.

Offensive Line:  The offensive line just hasn't been able to stay upright.  New offensive line coach Steve Morton should be able to get the most out of his players, but they need to stay healthy first.  The addition of Wade Jacobsen at tackle is one I love.  He's got a mean streak and loves to hit.  Andrew Roxas is the heir apparent to Kenny Alfred's spot, but he hadn't played since the last scrimmage due to an ankle injury.  Zack Williams was back at the last practice, but is a walking game of operation with all the injuries he's had.  Tyson Pencer, who was much maligned at tackle last year, and Micah Hannam have both made the move inside to guard.  Those two are both big boys at the guard spot and hopefully they can do some damage.

Wide Receivers:  Four wide receivers.  That's all we have this Spring. Sure they get reps, but four isn't going to cut it come game time.  Gino Simone is still the safety valve and mister consistent, even though he's been plagued by drops lately before injuring an ankle.  Simone gives the Cougs a possession receiver that has some slick moves and is very shifty.  Think Wes Welker.  Jared Karstetter has had a quiet Spring it seems, but is still Mr. Jump Ball in the endzone and a big target on the outside.  The new guys, like Isiah Barton and Bobby Ratliff, should be coming in and competing right away this summer.

Running Backs:  The running back spot is filled with a lot of bodies, many of which have been sidelined this summer.  The wild card in all of this is James Montgomery.  It would've been laughable to say that he'd be playing this coming year after the freak injury he had, but it seems like he'll be close to 100% by the season.  Marcus Richmond, Carl Winston, Chantz Staden, Leon Brooks, and Logwone Mitz have all missed time this Spring.  That'd be the whole group of backs.  Winston made his return at Thursday practice and reintroduced himself to Mike Ledgerwood, bowling him over to gain an extra few yards.  There's been a lot of talk about Staden's emergence this Spring, as well.  Staden is a third down back, however, and shouldn't be the guy carrying the load.  Between Winston, Montgomery, and perhaps Ricky Galvin, the bulk of the carries should be taken up.  Mitz is a good short yardage back and Staden is a nice change of pace.  If they stay healthy, we could have a decent running game.

Quarterback:  The talk from Wulff and the staff has centered around an open quarterback competition.  We all know who the starter will be, even if the staff wants to encourage the competition.  Jeff Tuel will be taking the snaps by the time the season starts barring something unforeseen.  Marshall Lobbestael just isn't the capable quarterback, as we all saw in game situations.  Backing them up is David Gilbertson, son of Keith, and handoff specialist Dan Wagner.  Just hope that Tuel stays healthy.

Kickers:  The kickers have been inconsistent to say the least.  They followed up the goose egg in the last scrimmage by being perfect in the practice after it and 66% in Thursdays practice.  I have no idea how they'll do this Spring, but I'm still not confident in Nico Grasu, nor am I in anyone else on the roster.  Let's hope the incoming freshman has a boot. 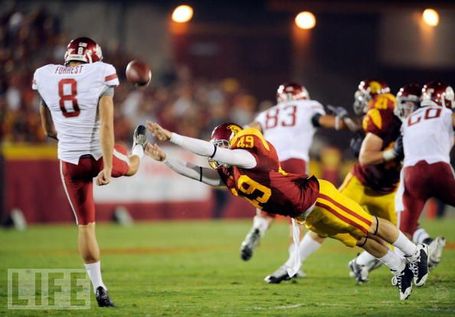 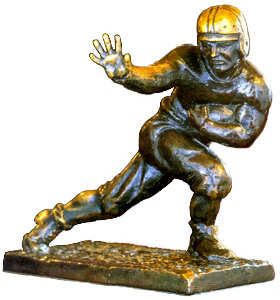 via jcrue.files.wordpress.com
So, this is what the Spring has been like so far.  The Spring game will give me a chance to better see what's going on and get a good feel on where the Cougs are headed.  I'll be back Saturday night with more.