BREAKING: Security on the West Coast to get major facelift

Share All sharing options for: BREAKING: Security on the West Coast to get major facelift

In shocking news today, the United States Coast Guard has announced massive layoffs and the decommission of the entire Pacific Coast fleet. When questioned by reporters, a spokesman for the Pentagon said that in these tough times the military has decided to go with a new approach when it comes to defending the country's borders and protecting private ships. From a press conference this afternoon:

We've identified a single individual who we believe to be capable of defending the entire left coast of this great country. He has proven over a course of many years to be an impenetrable force and has saved the behinds of many of his fellow countrymen. He is already an American hero, and this position will only add to his legend. We believe he will not only maintain the status quo when it comes to performing the Coast Guard's important duties, but actually improve the safety of our seas.

The Pentagon spokesman went on to say this person not only has the perfect combination of size and speed to cover the Strait of Juan de Fuca down to the Baja Peninsula, he also possesses the intelligence to capture and decode enemy and pirate communications.

"Argh," commented pirate captain Jacob Neohaima, "I don't like this new development one bit. I've seen that guy in action. I tend to be a little late off the line, and I fear I'm going to find myself frequently on my back."

"I'm tired of seeing my new releases ending up on the internet before I can even get them to the store," he said over the phone after the Coast Guard's announcement, "That big guy has shown the agility to get out in front and really clear the way. I expect our losses to drop dramatically."

Officials said there will be no formal training for this new individual, citing that he often trains on his own and seems to perform better in those circumstances. In a statement released just minutes after the press conference, Commandant Thad Allen praised this attribute specifically:

His ability to improve and condition himself without coaching is a great asset in itself. The military spends loads of money training people every year. This man represents everything that is right about the human race.

After all this, the real question is "Who is this perfect human specimen that the United States Military has deemed so perfect, so amazing in every way that they are willing to leave the great responsibility of protecting the entire West Coast up to him?" 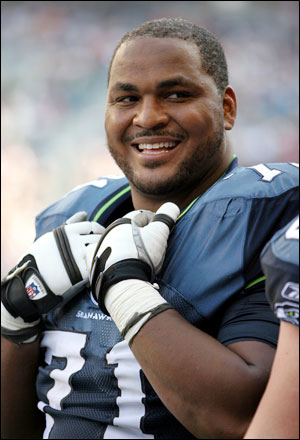 (And yes, this can be a Walter appreciation thread. I know this isn't a Seahawks blog, but hey, you can at least appreciate one of the greatest football players of all time)