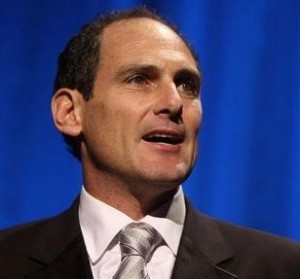 I'm reticent to heap too much praise on Larry Scott today, lest we saint the man too soon -- that doesn't always work out, you know, so well.

However, it's really, really hard not to sit back and be anything but impressed by what he has been able to accomplish in such a short time on the job. (Especially when you consider how little his predecessor truly accomplished in 25 previous years in the same position.)

What's most astounding to me is that he's a collegiate athletics outsider -- something that was a selling point for the Pac-10 presidents who were looking to invigorate their conference, but also something that can work against a league in the ultimate old boys club.

Think about it: This guy had no significant contacts inside the world of collegiate athletics, yet he has essentially orchestrated the demise of a major conference that will lead to a complete restructuring of the sport of college football. I'm honestly becoming more and more convinced that because this is all happening so quickly, we won't be able to appreciate the full magnitude and sheer brilliance of it all until there's a little bit of distance.

Still, we can continue to genuflect along the way.

Brian detailed earlier this week how Scott shrewdly used the media to force the Big 12's hand. Today's developments were just more evidence that the man leading our conference might, in fact, be well on his way to becoming the most powerful figure in college sports. I really don't think I'm exaggerating.

You might think it odd, as I did at first, that the conference moved forward with Colorado before making sure it had the big fishes it really wants -- Texas, Oklahoma, and the rest of the Big 12 invites -- in the fold. After all, Colorado was roundly considered the weakest link in this thing, with no political ties to any of the other institutions being invited. If those other five teams spurn the Pac-10, Scott will be forced to turn to Utah to fill out a 12-team conference.

But the more I think about it, the more I realize this was another pretty brilliant move.

First, Scott is serving notice to everyone that he's not bluffing about all this stuff. The conference is going to aggressively pursue who it wants, and status quo will not be an option.

"Hear that Texas? Hear that Oklahoma? We're straight up stealing a team from your conference -- with another one set to leave for the Big Ten -- and you're either going to get on the money-making train with us, or we'll find someone else who will. Have fun, by the way with BYU and TCU! That ought to really raise your profile."

Most interesting is that the first team to join the the new Pac-whatever conference was considered the most tenuous of the six invites, given the brief hullabaloo in Texas over Baylor. So Scott went ahead and killed that thing right away by adding Colorado as a preemptive strike.

"Hey, Longhorns: You gonna stay loyal to the redheaded stepchild at the expense of your own school? Because that's your choice: Come with us -- and bring your four other buddies -- or be left in the dust."

It's an aggressive blitzkrieg that has essentially caught the rest of the Big 12 with its pants down. And if I'm a president at one of those other schools the Pac-whatever will be inviting, I think that's the biggest selling point of all in this whole thing: Do I want to try and piece a crumbling conference back together with duct tape -- a conference that was allowed to fall apart on its leader's watch? Or do I want to join a money-making blockbuster of a league led by a forward-thinking man who has separated the wheat from the chaff?

Colorado already has made its choice, as (apparently) has Nebraska. And that's the choice facing Texas, Texas A&M, Texas Tech, Oklahoma and Oklahoma State. Which one makes them confident that they are going to be able to maximize their revenue -- not just in the next five or 10 years, but in the next 20 years? Because that will be the next time -- at the soonest -- anything like this happens again.