Disclaimer: The following post contains inordinate amounts of uniform related discussion, and is, therefore, extremely dorky. There are also a large number of links to pictures, in lieu of embedding pictures that we don't have the rights to, which would get us in trouble with the original photographers. You have been warned, and will be promptly escorted off the premises if you whine about any of this in the comments.

2009 was the year that WSU finally did what I had been hoping they would do for years: switch to Nike.

I should have been careful what I wished for.

It's not that I had something against Russell Athletic. Russell was fine. They were a small company, and by default WSU became one of their biggest clients. We were their flagship, if you will. They produced a solid, if not spectacular, Cougar jersey. The ultimate problem is that Russell - even at their best and most innovative - will never even come close to Nike when Nike is at their best.

Russell's idea of innovation is this. The only thing not awful about that uniform is that it gave WSU a unique number font, something we've never had (and something I want, which we'll talk about later). Outside of that it is a gigantic mess, despite the fact it was supposed to be a 'showcase' uniform for Russell. Meanwhile, when Nike innovates, it produces this. That is a phenomenal uniform in every way. Russell couldn't touch that design - and the quality of the material - with a ten foot pole.

I know what you're saying: Didn't Nike also produce crap like this, for the same school? You would be correct. Even the other uniform combinations of that same design I just raved about can produce disastrous results. Which is the problem with Nike: it is the most two-faced uniform producer in sports. Nike is actually divided into two distinct corporate divisions: Bad Nike and Good Nike. Good Nike creates this. Bad Nike counters with this. Sometimes Bad Nike goes so crazy, that Good Nike has to come in and clean up the mess. Nike produces some of the finest modern uniforms in all of sports, and some of the worst, all during the same season.

Still, I've always been a fan of Nike, because they believe in quality above all else. Regardless of the design, you're getting consistency. The colors are right, the materials are right, your school's brand is protected. Or at least that's what I thought...

Before we get to what was wrong with last season's (and most likely this season's) WSU gear, let's talk about what Nike got right. The road uniforms were a huge upgrade, even if we aren't regularly going gray-white-gray like we should be. Still, it's a huge step up from what Russell put us in the last few years, with the candy-striped pants and the ridiculous double-outlined numbers. Also, try to find gray on that Russell uniform (hint: you can't). Meanwhile, the new home uniforms are perfectly boring - standard block numbers, gray-crimson-gray in combination (which is an underrated look), and a return full-time to the Coug head helmets, which are superior to the script 'Cougars' in my opinion. Overall it's an acceptable look, but it won't turn any heads.

The problem is they are just so damn boring. They almost say Stanford (imagine gray in place of the white) as much as they say WSU. The sleeve striping is boring, and creates a stupid gray-colored armhole if you look closely. Look again at that picture, too. The crimson pants with the gray stripe? Awesome. The other pants? Boring, because the gray pants actually have a gray stripe (the color is slightly different) and the white pants also have a gray stripe, instead of crimson, for some reason.

Nike also screwed up by using material that causes an awkward looking "sweat square" on the home jerseys. Don't worry, we weren't the only school afflicted with this problem, and heaven only knows why Nike thought it would be fun to accentuate belly sweat.

Then, there's the color issue. Those uniforms are awfully red, and not so much crimson, right? (Edit: actually, a lot depends on how the light hits it, and I'll give Nike a pass on this since they aren't far off depending on how you look at it) Russell struggled mightily with getting the Cougar crimson color right over the years, but by the end they had it down. Nike needs to darken up the uniforms just a little bit to get it right.

In the end, Nike got close to making a good Cougar uniform, but fell far short. I can guarantee you these shouldn't - and won't - last more than a couple more years.

Whenever I try to come up with what a perfect look for the Cougs might be, I keep thinking about certain elements. First, it should be unique. You should turn on the TV and recognize that it's WSU - not Stanford, not Oklahoma, not Texas A&M - in the blink of an eye. The Cougs should have a unique - not crazy - number font, something like the Arizona Cardinals currently use. And the Cougar uniform should mix our school colors well, while not being so outlandish that they buck tradition.

That's why I am formally advocating a full time return to these: 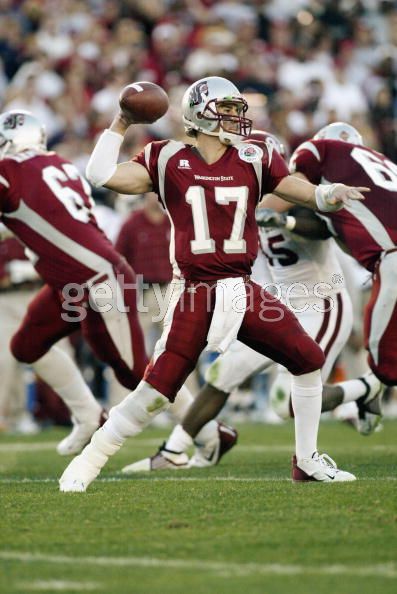 Those instantly say: Washington State. They have history. They've been to a Rose Bowl. They mix crimson and gray perfectly. The numbers? Not really unique, but the way teams are ditching drop-shadowed numbers left and right these days, they actually kind of are. The team gets the Coug head helmets, which I prefer, and the rest of the jersey gets to be monochrome without being boring.

My only problem with this set were the road jerseys, but then again our biggest Bowl win ever came in them. So there's history there, too. And, if you switch out the helmet for a gray one and switch the pants to gray with a crimson stripe, it could become a pretty solid look. Or you could mix and match. Heck, even the home unis look pretty good with the gray pants.

My complaint about those uniforms back in the days the Cougs actually wore them were that they wouldn't stand the test of time. And yet, here I am in 2010, calling for their return. Maybe I'm misty eyed for the days when our football team actually won games, or maybe I'm just itching for the Cougs to look like the Cougs again.

Regardless, Russell got something very, very right with these, and with Nike's materials the Cougs could be back on their way to looking like their old selves once again. Let's make it happen, swoosh.

What do you want to see, Coug Nation? Do you agree with me, or is the '98 Rose Bowl more your style? Or maybe you're into the cleaner Bledsoe-era jerseys? Or maybe you advocate maintaining the current set, or rewinding a bit to the Alex Brink days. Or, something totally different? Let us know in the poll and the comments.