Coug Commit features break down what each verbal commitment to Washington State University potentially brings to the program. For links to other Coug Commit features -- as well as everything else you'd ever want to know about the other commits -- visit our comprehensive WSU Football Recruiting Central hub. You can also read all of our recruiting coverage here.

Also, while we normally will go in chronological order of date of commitment, I've skipped Max Hersey for two reasons. First, there's practically no video out there on Hersey (at least that we've found). Second, his school will play my school this fall, so I'll get an up-close look at him then. 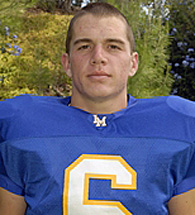 Max Gama of La Mirada (Calif.) High School was the third commitment to WSU's 2011 recruiting class, and his recruitment follows the same M.O. of Paul Wulff and his staff: Identify targets quickly, earnestly build relationships with them, offer early and snatch them up before other BCS schools can get in the door.

Gama committed way back on March 25, and according to Scout.com, he was holding offers from Air Force and Buffalo. We've come to expect that from Wulff recruits, who might not be fully developed but project nicely for the Cougs.

The difference here is that Gama doesn't look to fit the typical mold of the "late bloomer." The lack of attention on him might just have more to do with the fact that it's not clear exactly where he's going to end up playing -- high profile programs like their recruits to either be obviously projectable to a certain position or such freakish athletes that they'll be good wherever they're put.

Gama is neither of those. In his junior year, he played both running back and linebacker, and whether he ends up in either of those spots is a bit up in the air.

On offense, he's your typical "best athlete on the team" high school running back, but he doesn't seem to have the speed to play that position at the Pac-10 level. He's got some nice shiftiness and solid power, but he'd be a sitting duck for Pac-10 defenders. I suppose it's possible he gets bigger and compensates for the lack of pure speed with some size, but I'd say that's pretty unlikely.

It's seems obvious to me that his future is on the defensive side of the ball. If you watch his junior year highlights (linked above or embedded after the jump), you'll see a guy with excellent instincts and great closing speed. When watching these sorts videos, I like to see if defenders are just glorified headhunters, or if they have some clue about what's going on around them. And while Gama can clearly lay the wood a little, he's also pretty smart. Gama isn't just freelancing -- he sticks to his assignments, gets off blocks and makes plays.

But just where on defense he plays ... well, I suppose that depends on how big he actually is by the time he arrives in Pullman. Rivals and ESPN have him listed at 5-foot-11 and 185 pounds, while Scout has him listed at 6-1 and 195 pounds. If he's in that range, he would certainly seem to project as a safety -- especially given his nose for the ball.

One has to wonder if he'll still have the speed to play in the defensive secondary if he gets much bigger, though. Naturally, it's tough to know how big he actually is. In that video, he sure looks more like 5-11/185. The 6-1/195 might be what he's telling Cougfan he is right now, which would be perfectly normal growth for a kid between his junior and senior year. However, like most recruits, we probably won't get a clear sense of his actual size unless he participates in a combine (unlikely, since he's already committed) or until he arrives on campus.

If he does get a bit bigger, it's not crazy to think that he could end up at linebacker. It's not like there's not precedent for that -- Louis Bland, Myron Beck -- and sometimes, it's just good to get a good football player on the field. But that wouldn't seem ideal.

Gama doesn't seem like the sort of guy who would contribute immediately, which hopefully will be less of an issue because of built-up depth by the time he arrives in the fall of 2011.