Share All sharing options for: DEFENSIVE PLAYBOOK: Base 3-4 Defense

Disclaimer: This isn't a scheme WSU is running, nor would I want to give away the schemes they're working on. Instead, this is a general look at what it takes to run a 3-4 and whether it's feasible for WSU to do so.

The depth of the defensive line at WSU has been a concern over the past few years, causing some to wonder if it's a viable strategy to move to a 3 down lineman scheme. With the talent the Cougs have at linebacker, it lends to the theory that it may benefit WSU to run a 3-4 defense. The question has been floating around multiple places, so we thought we'd take a look at it to see whether the defense would suit the Cougs.

A 3-4 defense isn't a simple switch from a 4-3. On the surface it seems like we'd just be replacing a lineman with a linebacker and running with it. In reality, it's not that simple. The personnel required to play the defense is different and the assignments are counter-intuitive to a player brought up in a 4-3.

What follows is an in-depth look at what a base 3-4 defense entails and whether WSU could pull it off with success.

A 3-4 defense, in it's simplest form, looks like this: 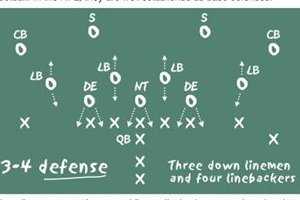 The secondary consists of four defensive backs in a similar alignment to a 4-3. Typically, the defensive backfield doesn't drastically change in any scheme, but the strong safety will line up closer to the line of scrimmage than a typical cover 2 look.

The benefit of the 3-4 is speed and deception. The defense will typically rush four, with a linebacker being the fourth person rushing. This allows the defense to disguise where the pressure is coming from. Any of the four backers can blitz and it's possible for any of the back seven to bring pressure. It could come from the corners, linebackers, or even the safeties.

The single most important aspect of a 3-4 is the play of defensive line. They absolutely must be able to tie up the offensive line no matter the situation. Unlike a 4-3, their job is not to get into the backfield and create havoc. Instead, the NT and DEs are there to control gaps and free up the linebackers to make tackles. Without lineman for the scheme the defense is incredibly vulnerable, to the point where it becomes useless.

Almost as important is the play of the linebackers. The backers must be able to make plays. They need to be sure tacklers, recognize the gaps open in front of them, and quick enough to shoot the gaps and disrupt the run of play. While the defensive line holds up the offensive line, the linebackers are the ones called upon to get into the backfield and stop the run or pressure the quarterback. These are the guys that will have high sack and tackling numbers.

This is where a 3-4 really differs from a 4-3. The 3-4 defense relies heavily on the play of the nose tackle. The nose tackle needs to be big -- much bigger than a typical defensive lineman -- and have the strength and technique to control two gaps while warding off double and triple teams.

The linebackers also require a different skill set. In a 3-4, they need to be bigger, stronger, and more versatile than in a base 4-3. The linebackers are called upon to create a pass rush and to clog the running lanes. Being able to shed blocks from anyone on the offensive line is a must.

In the secondary, the skill set required doesn't differ a ton. A strong safety that's bigger and able to blitz or stuff the run is an added bonus in a 3-4. The strong safety should be versatile enough to line up in the box in rushing situations, or cover the pass when needed.

Could WSU pull it off?

The short answer is no. The WSU defense would be consistently torched if they tried out a 3-4. The biggest player on the depth chart is 330 pound Tyson Pencer. Nobody on the depth chart could adequately handle the nose tackle position that is so vital to a 3-4 defense. They must be big, space-eating lineman that are strong enough to occupy both 'A' gaps.

While the concern about depth on the defensive line is real, playing a 3-4 is far from a cakewalk for linemen. In fact, it's a more physically demanding scheme than a 4-3. With the still undersized linemen the Cougs do have, changing to a 3-4 is a recipe for injuries, further hurting the depth we do have.

The linebacker corps is deep, but again they aren't suited for this type of defense. With Louis Bland likely out and Andre Barrington done for the year due to academics, the depth doesn't look as great as we originally thought. With only six backers on the depth chart, playing four at the same time doesn't seem like a great idea. Even adding in Sekope Kaufusi -- a typical tweener that could be an OLB in a 3-4 -- still doesn't give us what we need.

The secondary has a safety that is big and versatile enough to play the run, blitz at times, and cover the pass in LeAndre Daniels, but that's about it.

Transitioning to a 3-4 in the NFL is hard enough, even with the benefit of free agency and trades. It takes years to get the players in place and the scheme implemented to a level that is successful. Doing so at the college level is anything but an overnight process. It takes a fundamental change in the coaching staff's recruiting philosophy and some serious growing pains to learn the scheme and be able to run it sufficiently.

The last thing this team needs is a complete overhaul of the defensive scheme. The players in place were recruited to play a 4-3 and appear to finally be up to the task. Making a wholesale change due to fears about the defensive line would send this defense into a tailspin.