Part two in our look at defenses. If you missed the writeup on the 3-4, you can find it here.

Since the basics of a 3-4 defense went over well, lets move on to the next 3 down lineman scheme: The 3-3-5 (or 30 stack). A 3-3-5 is often confused with a 3-4, but not all 3 linemen schemes are created equally. As I noted yesterday, the assignments, philosophy, and personnel required to run a 30-stack greatly differ.

WSU has run the 30 stack on multiple occasions in the last few years, usually out of necessity. As we all saw, the defense was largely overmatched and undersized against Pac-10 offenses. With the loss of multiple linemen, it became necessary to experiment with different defensive schemes.

This year, that does not appear to be the case. WSU enters the fall with a defense that looks better than it has at any other time during Paul Wulff's tenure. With an abundance of freshmen coming off redshirts and the rest of the defense with another year under their belt, co-defensive coordinators Chris Ball and Jody Sears should be able to run whatever scheme and base defense they deem necessary.

What follows is a look at the stack and whether it's beneficial for WSU to run it this year. 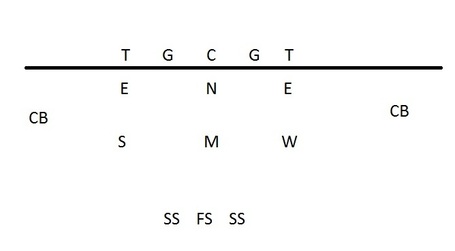 Unlike the rigid assignments of a 3-4, the linemen can shift their alignment based on the formation of the offense. If the offense is strong left or right (which side the TE is on), the whole line can shift one gap over. Instead of simply trying to hold off offensive linemen so the linebackers can make plays, the defensive line is called upon to get into the backfield and create pressure or stop the run.

The three linebackers line up behind the three defensive lineman. On the back end, the cornerbacks take their typical positions on the outside. Depending on the situation, a nickel back can line up in the slot or two strong safeties can line up on each side of the free safety.

Pre-snap in a 3-3-5 consists of a lot of movement, with the defensive line shifting and linebackers moving around based on the look the offense gives. Where a 3-4 relies on deception in the pass rush -- with any of the four linebackers bringing pressure -- the 3-3-5 disguises coverage and pressure with pre-snap movement.

Where the linebackers are set pre-snap is also not rigid. In a basic set, the alignment is as described above. If the defense feels a power running play is on the way, the defensive line shifts and a linebacker comes up as a rush end, with the rest of the defense shifting more towards the middle. In obvious passing situations, they can spread out, allowing the backers to drop into coverage with ease. It's all about versatility, speed, and deception in the 3-3-5.

The linebackers -- as with any scheme -- need to be sure tacklers. With only 3 down linemen, the defense is susceptible to being gashed up the middle. If the linebackers miss a tackle, a 4 yard gain can quickly turn into a long run. The loss of a defensive lineman magnifies any errors made by the linebackers.

A 30 stack is designed for fast, but undersized, defenses. Swapping a lineman for a defensive back adds speed to the field and allows the defense to adequately cover offenses that rely heavily on passing. The additional defensive back used in a 3-3-5 should be versatile, being able to play both in the box and back in coverage. In fact, the two safeties and extra defensive back should all share this trait.

4-3 linemen should be able make the move to a 3-3-5 with ease. Since they're not required to simply be space eaters, the assignments don't require a drastic change in personnel. The three linebackers can also be similar in makeup to ideal 4-3 backers. The need to have good speed, but don't necessarily need to be giants.

The biggest difference in the scheme is the use of that extra defensive back. The 5th DB can play like a rover, moving about the field depending on the situation. It's a position we saw Myron Beck play when we did run a 3-3-5 in the past. It helps to have a 5th defensive back that's a tweener between a linebacker and safety.

Could WSU pull it off?

On paper, of course they can. While the results weren't ideal in the past, it has been done before at WSU. The shift in personnel isn't drastic and picking up the scheme wouldn't be rocket science compared to a 3-4.

On the defensive line, Brandon Rankin and Travis Long could excel in this. Without having to simply be space eaters, these two could wreak havoc in a backfield without having to worry about plugging multiple gaps. With the threat of a fourth pass rusher coming from anywhere on the field, the offensive line couldn't simply sell out and double-team them all the time, either. If an offensive line did, it wouldn't be difficult for a linebacker to easily create pressure and force sacks.

The early verdict on the speed and ability of the WSU secondary is positive. Nolan Washington, Anthony Carpenter, LeAndre Daniels, and so many more all have the ability to play at a high level. Putting a combination of five of these backs plays to the strength of the defense this year. Even Myron Beck could move from linebacker to the rover spot he's played in the past.

The linebackers are also a strong unit for the Cougs right now. I have little doubt three of them could step in and adequately play in a 3-3-5. Whether it's Alex Hoffman-Ellis, Mike Ledgerwood, Darren Markle, C.J. Mizell, or any of the others, all of our linebacking corps would be able to easily adjust.

If WSU is running a 3-3-5 as the base defense, something has gone wrong again. Yes, there are benefits to running it with the personnel the Cougs have, but we are still a 4-3 team. Seeing a 3-3-5 on a regular basis likely means the defensive line has been hit with a rash of injuries.

That doesn't mean we won't see the 3-3-5 at all, though. The defense works best against teams that spread the field and play a run and shoot. As Jeff pointed out to me last night, we've seen the 3-3-5 against Hawaii, SMU, and every team that runs a spread in the past two years except for Portland State. In situations like those, it's in the Cougs best interest to move away from the 4-3 to stop what could be some very potent offenses.

I doubt the 3-3-5 has left the playbook, so look out for it when the situation calls for it this season.