The Tailgater's Guide to Cougar Football: Week One

Share All sharing options for: The Tailgater's Guide to Cougar Football: Week One

The Tailgater's Guide to Cougar Football is a weekly series, published every Thursday afternoon, designed to prepare you for the upcoming week's matchup - both on and off the field.

Why You Should Care

We've come full circle, haven't we? The team Paul Wulff opened up his coaching career against in 2008 is also the first opponent for the most important season of his college coaching career. Wulff is coaching for his job this fall - maybe more to show signs of competitiveness than actual wins - but the journey starts here. Two years ago a relatively healthy WSU team actually held their own against OSU and one of the nation's best offensive lines, anchored by current injured Seahawk Russell Okung. The Cowboys' potent rushing attack only ran for 174 yards that day, which is a pretty remarkable stat considering that year's Cougar defense gave up an average of 247 yards per game that season (5.78 yards per attempt). If Wulff is to start the campaign off right this fall, he doesn't necessarily need a win in this one, but he does need to show us his team has the ability to compete with an upper tier BCS conference team.

Not on the hot seat is Oklahoma State coach Mike Gundy. You remember him, right?

Apologies to Cowboy fans, but that never really gets old.

For the sake of accuracy, Gundy is now the ripe old age of 43. But he still rocks a mean pair of shades: 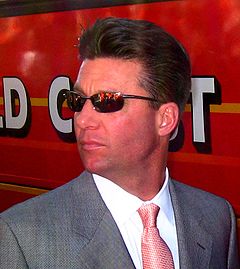 There isn't really a point to all this, I'm just fascinated by Mike Gundy. He's a mustache away from volatile coaching perfection.

Two units with two very different expectations. The Oklahoma State O-line is expected to regress from their previous form, a unit that consistently held their own against the Texases and Oklahomas of the world. The Pokes have a new quarterback in Brandon Weeden, and he won't get the protection in the form of Okung and one of the nation's best lines. That left tackle job now falls to junior Nick Martinez, who has huge shoes to fill, both literally and figuratively. Kevin Kooyman and Travis Long are two quality defensive ends who may be able to take advantage of any weaknesses on the OSU line. If the Cougs can get significant pressure on the quarterback early, they might just rattle the OSU offense and keep them from building a lead.

Meanwhile, the Cougar defensive line is revitalized and features a promising new talent in Brandon Rankin. Paul Wulff sees this unit as one of the strengths of the team. For his sake, he better be right. The Cowboys are going to try and put this game on the shoulders of talented running back Kendall Hunter. If the line is porous against the run, this game will be over in a hurry. The key factor for WSU in 2010 - in all their games - will be the defense. If they can keep games close and force turnovers, they may be able to capture a win or two, even if the offense is less than stellar. After the last two years, I'd much rather see a 14-0 or 21-0 result than 69-0 or 54-7. It all starts up front and the Cougs have a lot to prove in terms of stuffing the run.

Kendall Hunter, OSU - In 2008, Hunter was the seventh leading rusher in the entire nation. Coming off injury in 2009, he's ready and willing to prove he's back, and a legitimate NFL prospect. The Cougs do have a chance in this one if they can keep him under the century mark.

Jeff Tuel, WSU - I have to go with Tuel, by default. The defense needs to perform as an entire unit; the running game and receivers are talented but don't have a clear game-breaker among them. Jeff Tuel can single-handedly keep the Cougar offense afloat - assuming he has any time whatsoever to throw the ball.

Why Oklahoma State Will Probably Win - There's a lot of youth on this OK State squad, but there's also a lot of talent. Kendall Hunter against a team that has struggled recently against the run just seems like too favorable a matchup for the Pokes. Not to mention the fact that the Cowboys have home-field advantage and are riding a school record streak of 14 straight wins in home openers (granted, the streak is meaningless for the purposes of this game, but I think it sounds cool, which is why I'm sure you'll hear FSN mention it about 17 times).

Why WSU Might Win - OSU suffers from youth, inexperience and a lack of Russell Okung. Dez Bryant and Zac Robinson are also gone, and the Cougars are actually relatively healthy - just like they were in '08 when WSU held their own for a while against a much better Cowboy team. The chance may be 1 in 80 or so, but hey, I'm saying there's a chance.

Recommended Local Activity - If you make the trip to Stillwater you'll be fairly close to Oklahoma City. And while I don't want to dampen your spirits, it's worth checking out the Oklahoma City National Memorial and Museum. The Memorial honors the people who died in the 1995 bombing of the Murrah Federal Building in OKC - at the time the worst act of terrorism in American history. Apparently it's worth checking out both during the day and at night, for the stunning visuals. It's a fitting tribute and an important reminder that Oklahoma City is a real city with a heart - not just the home of an evil businessman who helped steal the Sonics from Seattle.

The More You Know (Fun Fact) - The All-American Rejects are from Stillwater. Fitting, because when I think modern rock, I think... anywhere but Oklahoma.

Gametime Snack of the Week - Pepperoni Sticks. Start the college football season off right: with unhealthy, salted meat in stick form. SEC fans would be proud of you.

Gametime Beer of the Week - Bitburger. Germany's finest pilsner, at least in my opinion. And my opinion matters because I write for a prestigious blog!

I've come to trust the majority of German and Czech beers, since Germany drinks the most beer by volume and the Czechs drink the most per capita. So they know how to make tasty lagers that are brewed for mass consumption.

Don't worry, though, there's still plenty of time in the season to give some love to our Northwest beers. I just thought I'd kick things off internationally. And Bitburger happens to be available in 24-packs at certain Costco locations. So grab a pack and enjoy.

This is a tough call. I could see the game either being much closer than expected - within a touchdown or two - or being another blowout at the hands of a much more talented opponent. I split the difference for my prediction.

Enjoy the game, and as always, Go Cougs.