Against USC, Jeff Tuel was given the keys to the Cougar offense and told not to crash the car. Like a parent giving their freshly-licensed kid their first car, offensive coordinator Todd Sturdy entrusted Tuel with the offense and let him make his own mistakes.

A look at the stat line doesn't reveal how well Tuel did against USC. 24/37 with 222 yards, one touchdown and three interceptions looks like he had a bad game on the surface. He really didn't. One interception was on a poor read, the other two came down to timing issues. Against a tough USC defense, he held his own throughout the day.

Watching the game, I saw a quarterback making the right reads and adjustments, while making a few youthful mistakes that should be expected. Tuel was charged with getting the offense to the line without a huddle, then making adjustments based on his reads. Everything the offense did yesterday was based on what the sophomore quarterback saw at the line of scimmage.

The one glaring mistake was Nickell Robey's interception return for a touchdown in the first quarter. After the jump, we'll look at that play and explain how today was a learning experience for the quarterback.

The offense got set and USC showed this look right away on the play Robey took the other way for a touchdown. 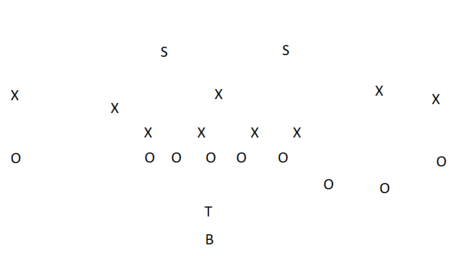 Looks like cover two, right? Safeties in the middle of the field near the hashes, corners look like they have flat/curl and the linebackers/extra defensive backs look like they're going to fan out. Tuel appeared to make this read in his pre-snap progression.

Just before the snap, though, USC shifted into this look. 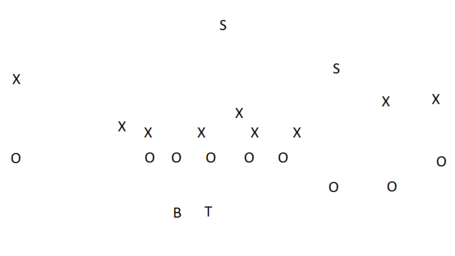 I'm doing this from memory, so the formation may be a little off. The one thing I did pay close attention to was the movement of the safeties and the positioning of the corners, though. (Edit: Fixed the diagrams. The offense had three to the right and Wilson singled-up outside).

The cornerback on Marquess Wilson (left side) backed-off, giving about a seven yard cushion. The safeties moved to a single-high look, with the safety that was on the left hash moving up to the slot. All of this happened quickly, right before the snap.

The read on the play is the cornerback lined-up over Wilson.

"The corner was in a grey area." said Tuel, "It was an option where Marquess could do two different routes. I just threw it late."

"It was a route we run all the time. If it's press we run vertical. If it's loose we run a hitch." said offensive coordinator Todd Study. "Jeff should've seen that pre-snap and he made a mistake. The kid timed it up and made a great play."

Tuel was upset with himself after the game, but also vowed to learn from it. "Nobody likes throwing a pick-six. I gotta learn from it, move on." said Tuel, "It won't happen again."

USC spent the game playing a "chess match", as the coaches called it, against Tuel. The offense would check based off Tuel's reads and the defense would adjust, creating a cat-and-mouse game. The fact that he was making checks and adjustments at the line was encouraging and shows his maturation as a leader.

After throwing that early interception, Tuel limited his read-based mistakes the rest of the game. His other two interceptions were to the right players, but in the wrong spots. In those cases, the interceptions seemed more physical than mental. Tuel, however, was confident in his throws and took responsibility for the picks

"The ball didn't sail, I just kind of missed timing. I felt like I put the ball where it needed to be, for the most part." said Tuel. "It happens; its part of the game. I'm not gonna sit here and point fingers, obviously. I threw the picks, they're on me."

The bad throws were expected growing pains for the young quarterback. On the positive side, he ran the offense as it was designed, made smart checks and got the ball to his playmakers. It wasn't so much what he did with his throws, but how he orchestrated the offense.

Poor throws can be cleaned up, but making the mental side of the position -- making the right reads, setting the offense, knowing when to get rid of the ball -- is much harder to correct. Tuel showed off his ability to use his head on Saturday, giving the offense an excellent foundation to build off of.