Share All sharing options for: The Tailgater's Guide to Cougar Football: Week Two

The Tailgater's Guide to Cougar Football is a weekly series, published every Thursday afternoon, designed to prepare you for the upcoming week's matchup - both on and off the field.

Why You Should Care

A win - maybe. The Cougs haven't seen the bright side of a scoreboard since last year's win at home over Southern Methodist. Despite the gap in talent between the Cougars and the rest of the Pac-10 the last two seasons, the Cougars were still wildly successful the last time they met up with a Big Sky team: Portland State, in 2008. WSU handled the Vikings with ease that day, 48-9. The talent gap between FBS (1-A) and FCS (1-AA) was clear and even a WSU team near their worst exposed the weaknesses of the lower league.

But Montana State is a slightly different animal. The Bobcats come in ranked 23rd in the most recent FCS Coaches poll, and have had success against FBS teams in the past. In 2006 they spoiled Dan Hawkins' coaching debut in Colorado, winning 19-10 in Boulder. That win was a lot more shocking than a win over Pullman in 2010 would be. MSU has been there, and you can be sure they aren't simply looking at this as another payout game.

The prospect of a win isn't the most exciting thing about this game, though.

Nope - the best thing about this game is that football is finally back in Pullman. Which is always cause for a celebration.

The first home game always has some magic to it. There's that renewed sense of hope, a chance to make some new memories watching a Cougar football game. Finally, you get to turn off the TV and get all your senses involved in football again. The sight of the team running out of the tunnel. The silky smooth voice of Glenn Johnson. The smell of unhealthy tailgate food. Also: the taste of the aforementioned food. The feel of the Palouse wind brushing up against your side (note: that feels pretty awesome in September, absolutely horrible from mid-October on).

Football already came back, yes. There was a full slate of games last weekend.

But it isn't really back until you hear Glenn Johnson announce the Cougs are coming.

As the resident pessimist here at CougCenter (at least at the moment), I've already made my remarks about losing faith in the Wulff regime. But now that I've done that, I feel kind of free. Free in that I can put all that behind me and just enjoy watching football again. If the side effect of that just happens to be this team turning the corner and Wulff winning me over again, great. If not, it's still Cougar football. There's no chance in the world I'd ever root against our coach or our team. Let's hope our fandom is rewarded this week.

Dual threat quarterbacks have haunted the Cougar defense for the better part of the last decade. Heck, even some quarterbacks not traditionally thought of as duel threat guys have killed us (cough-Kellen Clemens-cough). Which is why I'm always concerned about a mobile quarterback attacking our defense outside the pocket, or on the run down the field. Given how our defensive ends looked in last week's game, it's even more of a pressing issue.

A lot of people, myself included, view McGhee as the key - Brian touched on this during his SBN game capsule, as did Grippi in his first look for the Spokesman. In terms of the matchup, I put it on our entire defense, because if the line struggles the defensive backfield and linebackers will have to pick up the slack. Or vise versa. Montana State will need to have a successful day on offense if they want to win Saturday, since this will be one of the only times WSU's offensive line should match up evenly with the opposing D-line. Jeff Tuel and co. should be able to have plenty of success. This could be a repeat of the high scoring Cougar blowout of the 'Cats from 2001.

Marquess Wilson, WSU - Pac-10 level skill players, perhaps more than anyone else, really get the opportunity to shine against FCS opponents. And that's because as good as Montana State looks this year they will be hard pressed to cover all the Cougar wideouts consistently, especially if Jared Karstetter is back and close to 100 percent. WSU has a marked advantage in the receiving game, and if our defense is porous they may have to find the end zone multiple times to earn the Cougs a win.

Wilson has to be confident coming off a stellar performance in Stillwater, and the trust Jeff Tuel has in him should lead him to another score or two.

Why WSU Might Win - We've talked about the FBS/FCS talent gap, and I think it's worth noting in terms of play at the line of scrimmage. While WSU's offensive and defensive lines have been beat up numerous times in the last two years, WSU has had success in games where the talent is more even in the trenches. I'm talking about Portland State in 2008, Washington in 2008 and SMU last year. If Jeff Tuel has time, James Montgomery has space and time of possession tilts in our favor, you have to like the Cougs in a blowout.

Why Montana State Might Win - A strong game from McGhee backed by a stellar defensive performance can keep Montana State in this game deep in the second half. From that point, anything can happen. Turnovers may turn out to be the key. If MSU can force a couple in key situations, they can overcome the obvious talent gap between the teams. 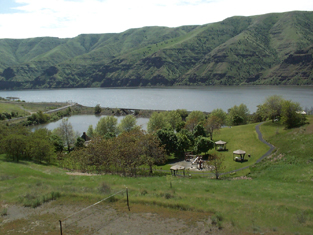 I'm assuming it should still be relatively warm in Pullman this weekend, so let's say goodbye to summer with a trip down to Wawawai and the mighty Snake River. Oh, there's also some cliffs you can jump off. But safety first, kids. Only jump in areas where there are large numbers of people stupid enough to try it first.

Recommended Food - Tam's Place. Tam's is more of a locals' hideout. It doesn't get the hype and the lines of Old European or the Breakfast Club in Moscow, but I'd put most menu items right up there against the competition, and some dishes are better. They have my favorite Biscuits and Gravy in the area outside of the Residence Halls, and you can also team it up as a side with Chicken Fried Steak. The whole plate gets covered in gravy under that scenario, and it's INCREDIBLE. I'm going to die of a heart attack.

My wife is more of a fan of their Eggs Benedict, but I think it's pretty much impossible to go wrong here. Plus you can enjoy your meal while looking at a poster of the '98 Rose Bowl field and/or the 'Boycott TV violence: come watch the Cougs in person' poster.

Bonus: convenient access to campus and a reasonable (yet uphill) walk to Martin Stadium.

The More You Know (Fun Fact) - Despite what Montana State's conference would have you believe, the sky is actually the same size everywhere you go.

Gametime Beer of the Week - No FCS-quality beer for the Tailgater's Guide. The beer of the week is Hop in the Dark, recommended by our own Brian Floyd. From their website:

Can an IPA be black?  Semantics aside, this noir version adds deep roasted malts to alter the hue and slightly smooth the edges.  What emerges is something deeper, less orthodox, and all its own.

Closer than a blowout, but nothing to bite your nails over.

Enjoy the game, and as always, Go Cougs.