Share All sharing options for: A Veteran Comeback, Measured In Visual Form

In the wake of Saturday's three-point victory over Stanford, WSU coach Ken Bone said something in Vince Grippi's gamer that caught my eye:

"I'm really pleased we as a team held our composure on the road in a tight game," Bone said. "We looked like a veteran team. To me, that was the greatest thing about this win."

All last year, the theme was how young the team was, how they just didn't have the composure to win games down the stretch that comes only from experience. Problem is, this team was suffering second-half meltdowns again this year. Granted, there aren't any seniors on this team, but these are guys that aren't kids anymore, either.

Then came yesterday. And if you want to know what a veteran, comeback win on the road looks like, here's Ken Pomeroy's win probability graph from yesterday's game, which he considered a toss-up when it tipped off. (If it's too small, click here for the graph at kenpom.com.) 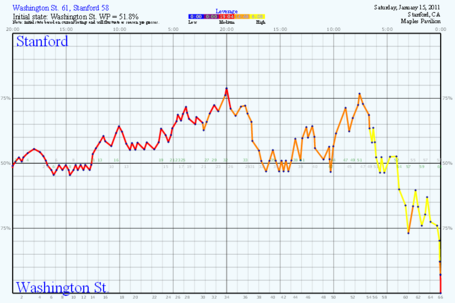 Almost the entire second half was played at medium-high to high leverage, and twice the game was more than 75 percent in Stanford's favor -- the last with about 7:30 to go after the Cougs had twice pulled the probability in their favor earlier in the half. And yet, these guys hung together -- without their starting point guard -- to overtake a team that hadn't lost at home all year, including a win over the Huskies two days before.

But if these guys can keep things moving in the right direction this year, we might very well point to this game as the moment this team grew up.