Our recruiting profiles break down what each recruit with a verbal commitment to the Washington State football program potentially brings to the team. For more detailed information on Mayes, links to other profiles on verbal commitments and everything else you'd ever want to know about the other commits, visit our comprehensive WSU Football Recruiting Central hub. You can also read all of our recruiting coverage here.

Logan Mayes is a hybrid DE and LB out of Marist High School in Eugene, Oregon. He was the fifth verbal 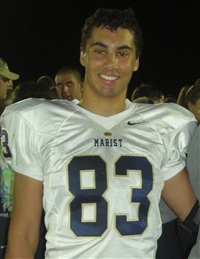 commitment of this class, choosing to go crimson on May 19th of 2010

It's kind of fitting we're following Max Hersey with Logan Mayes. Like Hersey, Mayes in a bit of a hybrid, playing some end and some linebacker. Also like Hersey, Mayes is a legacy -- son of WSU legend Rueben Mayes.

Projecting Mayes isn't easy considering he's a tweener right now -- too small for defensive end and growing out of linebacker-size. He may have the speed to drop into coverage and come off the edge, and his versatility gives Paul Wulff and the Cougs some options when he hits campus.

If I were to venture a guess, I'd say he ends up in a spot like Sekope Kaufusi. The Cougs tried the stand-up rush-end position with Kaufusi, opting to scrap it and put him back at linebacker. Either Chris Ball changes the defense and uses a rush end, or Mayes works from the WIL spot. If he keeps growing, which he's been doing already this year, he could end up with his hand in the ground on the outside.

Want to know what he's been up to this season? Check out his running diary at Oregon Live. After the jump, we look at the videos.