As promised, I am going to be visiting many different college basketball venues over the next month and reporting back to you on what I've found.

First up was what the old folks like to call an "intersectional" match-up between St. Mary's and Vanderbilt.  I chose this game to visit Memorial Gym because it looked to be the best chance to see a tight contest on the remainder of Vandy's schedule.

That was not the case.  The Commodores used a 27-7 run to end the first half to sieze control and fended off a couple comeback attempts from the Gaels to eventually win by a convincing score of 89-70.

But my visit to Memorial Gym wasn't really about the game, it was about the experience.  I wanted to see how the Vandy gameday stacks up against others that I've seen and heard about.  I'll start off with the arena itself, because that was what I was most impressed with.  Each category will receive a rating of 1 to 5 Screaming Craig Heads. 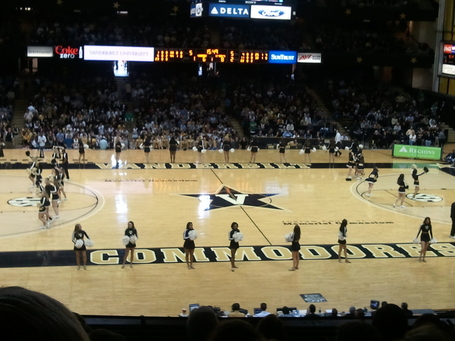 Overall, I  liked the layout of the building.  It is an often overused cliche, but there are very few bad seats in the house.  My seats were on the second level, but they were not as far back as some of the seats in first level at Beasley Coliseum.  The levels are almost straight up, similar to what I was have been told Mac Court looked like.  The fans are right on top of the action (or in some cases, below it), and the building has the potential to be very loud.

The students are given prime treatment with seats on the edge of the court alonng the sideline.  It looked there were three sections reserved for them.

The only real nitpick I have is the large spaces between the sideline and the stands, which may look worse because the court is elevated slightly (it is about waist-level to the fans in the front row).  There is also the oddity of having the benches along the baseline instead of the sideline.  It was pretty strange to see Randy Bennett of St. Mary's basically standing under the basket.

Memorial Gym really was a nice place to watch the game.  It has earned itself four Screaming Craig Heads. 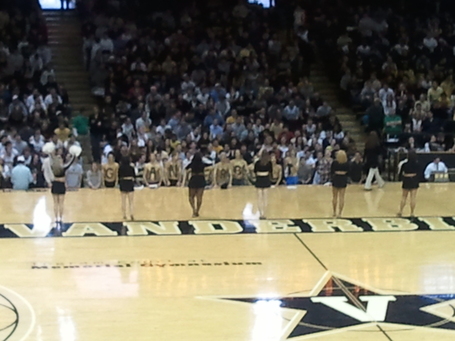 Of course, it takes more than just a good venue to make a great college basketball experience.

I detailed in September of 2009 (have I really been in Nashville that long?) how unimpressed I was with Vanderbilt fans at football games.  While they did seem like a generally disinterested bunch then, their football team has been historically awful, with even lower-level bowl games being a rarity.

The basketball team is a different story.  They have had success, going to several NCAA tournaments in the last decade.  That will probably tell you why the crowd was near-capacity for Saturday's match-up with St. Mary's.

Initially, it seemed the crowd realized the importance of this game for both teams (rare out-of-conference midseason resume builder).  The students were bouncing up and down and screaming while Vandy was on defense.  They were using coordinated cheers while the Commodores were on offense.  Most notable was a group of young men in the front row who were shirtless, painted gold, and each had a letter on their chest to spell out "Go Vanderbilt."

However, after the first media timeout, the crowd had trouble maintaining the energy.  The students only cheered on defense after the offense made a big three and the rest of the fans only made noise if they were booing the refs or expressing disgust in their own players.  The booing of the refs was pretty funny to a casual observer like myself as none of the calls were all that controversial.  I understand that home crowds don't tend to be very good distinguishing good calls from bad ones, but these folks were a little over the top.  I counted twice where St. Mary's was called for a foul off the ball, only to have Vanderbilt give the ball back on the next possession for doing the exact same thing.  Each time the "Bulls***" chant rained down.

The loudest cheers may have came when some of Vandy's little-used players came onto the court in the closing seconds.  Pretty sad when the home team is putting a whooping on a nationally ranked team. 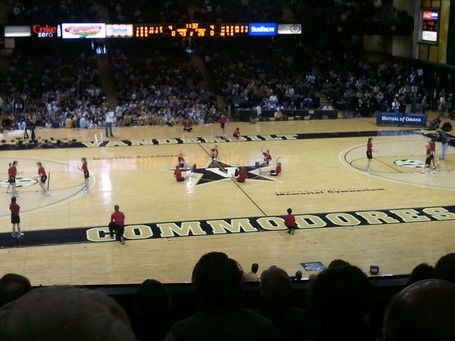 There are only three things a college marketing department needs to know to make halftime shows entertaining to fans:

1. Use college student's obsession with free stuff to get them to do silly things

2. Use children who can do awesome things that adults wish they could still do

I once sprinted the length of Friel Court four times to assemble a giant burrito for the prospect of a 10 dollar gift certificate.  Another time I competed with a 10 year-old for a free pizza.  I'm not sure exactly what the contest was, but I know I cheated and still lost.

Vanderbilt was able to nail the first two on the list.  Halftime began with two groups of college students who were charged with rolling one of their friends the length of the floor, then having them run back.  The one being rolled was wearing a sumo suit.  Watching someone try to sprint in a sumo suit is a sight that all humans should have the privilege of viewing.

After the sumo contest, a group of kids holding jump ropes took the floor.  They did all sorts of awesome choreographed routines and it was finished off with some fantastic solo performances.  They were no ninja kids, but still awesome nonetheless.

Vandy's halftime entertainment earns three screaming heads.  Why not more?  Because only the ninja kids can be a perfect five and criteria number three was not met.

When I say logistics, I basically mean how easy it was to actually attend this game.  For that, Vandy gets pretty high marks.

First, getting tickets was simple and cheap.  I purchased them on Razorgator.com.  The list price was $5 each.  I had a $10 off coupon, so with shipping and tax I paid about $9 a ticket.  Not bad and a lot less than I will pay on some of my later adventures.

I was able to park about 8 blocks away for free on the street.  I probably could have parked a little closer, but I didn't feel like searching. My knowledge of the Vanderbilt area helped out on that one, because you do have to pay to park in the garage next to arena.  If you did do that, there is a skybridge that connects the two so getting back to the car wouldn't be hard.

Finding our seats was a little difficult once we got in, as you have to take sort of an educated guess and go down an unmarked hallway if you want to get to different sections of the arena.

There were concessions everywhere, and when we went to get a hot dog during an injury timeout there was no line at all.

So that's that for Vanderbilt's Memorial Gym.  I would definitely go back to a game there, because I love college basketball and it is just a comfortable place to watch it.  The fans could stand to be a little more passionate, but I probably just have impossibly high standards (see screaming head rating system).

Tomorrow night I will be attending the "Battle of the Boulevard," which is the game between Belmont and Lipscomb.  They are two Atlantic Sun Conference schools who are located less than three miles apart on Belmont Boulevard in Nashville.  It will be at Lipscomb's Allen Arena and I've managed to score a credential for it.  Should be fun!