That is exactly why I wanted so badly to attend the "Battle of the Boulevard" between Belmont University and Lipscomb University.  The two schools are separated by less than three miles and reside on the same exact street in Nashville (Belmont Boulevard).  I knew that regardless of what happened on the court, the game would be fun because of the passion from the fans.

And I was not disappointed.

Heading into this contest, Belmont was pegged as having an 84% chance to win by kenpom.com.  They won the previous match-up at home by 36 over Lipscomb.  The odds of a tight game seemed very unlikely.  Early on, it looked like Tuesday's "Battle of the Boulevard" was headed for the same sort of fate, as Belmont jumped out to a 38-20 lead in the first half.

However, led by big man Adnan Hodzic, Lipscomb was able to chip away at the lead and by halftime they were staring at just a nine point defecit.

Hodzic continued to be an unstoppable force and the Bison (Lipscomb) pulled within a possession by the first media timeout of the second half.  The rest of the way the game was mostly within 2 or 3, as Belmont and Lipscomb would seemingly trade big shots.

The Bison dealt the final big blow when junior guard Jordan Burgason hit his third three in the last ten minutes to give Lipscomb a six point lead with around a minute left.  The arena went nuts and I sat with smile, knowing I would see at least one "court-rushing" game on my Magical Tour.

I am too legit. 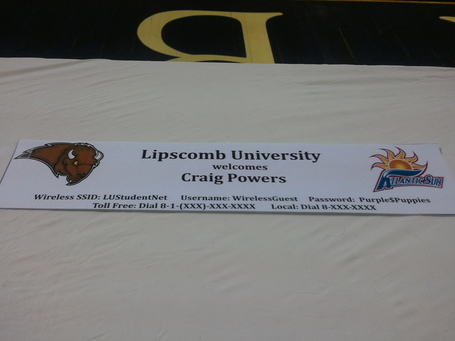 Lipscomb students getting hyped up before the game. 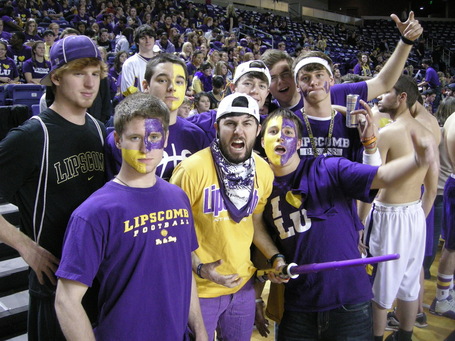 Adnan Hodzic about to score one of his 26 points. 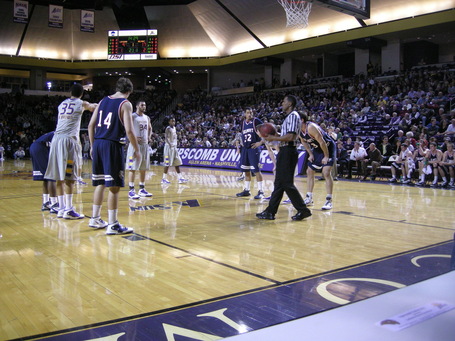 Belmont's Jon House gets ready to guard an inbounds pass in the waning moments of the game. 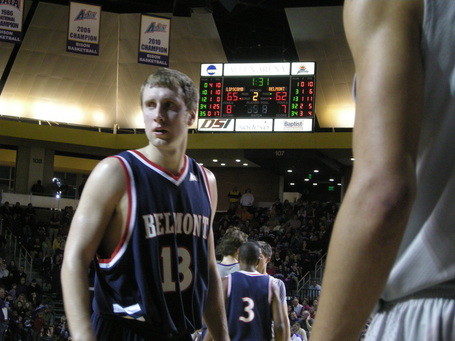 Or maybe he was distracted by this... 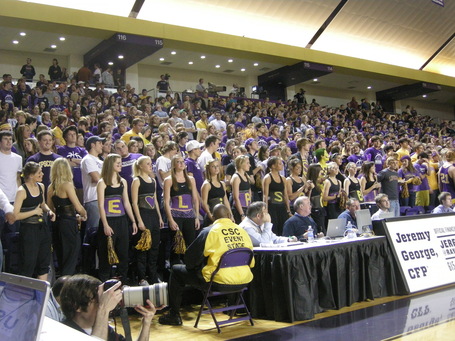 I was hoping the students would rush the court, and they did not let me down. 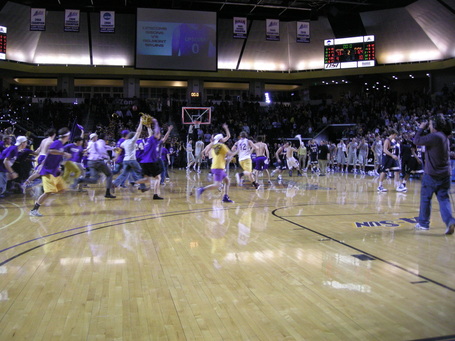 Before I slow your load time down even more....on to the ratings!

Lipscomb's arena is located right in the middle of campus.  It's layout is very similar to Gonzaga's K2, but with about 1,000 less seats.  It looks to be recently built and is located right next to a parking garage. Very handy.

The court is mostly closed off from the concession area, so it holds sound in pretty well.  The place got very loud during the beginning and end of the game.

Overall, Allen Arena is still new and shiny, but there isn't really anything that set it apart from other mid-major arenas.  I give it two Screaming Craig Heads.

I met with several students to get a feel of how important this game was.  The first guy I met with was Tyler Osborne, a freshman Math Education major from Erie, Pennsylvania.  I wanted to interview someone who looked like they were very emotionally invested in the game, someone that stood out.  A cape, afro, and sunglasses will definitely do that. 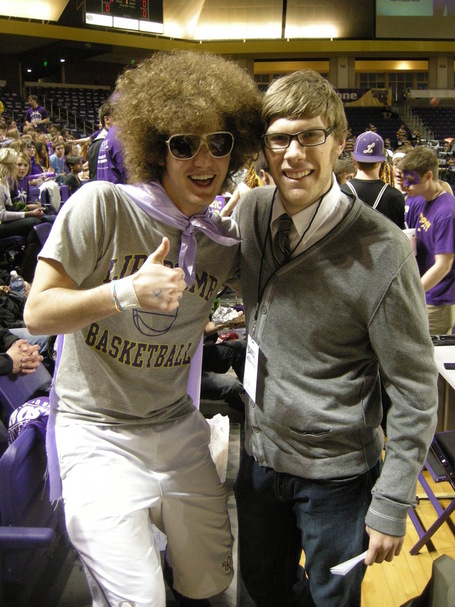 Sure enough, Mr. Osborne went on to tell me how the night before the students participated in the traditional "Running of the Bison."  A sort of pep rally where all the students gather in the center of the campus dressed in spirited outfits and run around the neighborhood surrounding the university.

I questioned another group of students about the sort of rivalry Lipscomb has with Belmont.  Do they always root against them?  Or is it a friendlier sort of rivalry where they are nicer when they aren't playing each other?

The overwhelming response was that Lipscomb thinks of Belmont the same way that Washington State hates Washington.  They hope they lose every game.  Or as Bison student Andy Pickle (Bearded dude with the purple light saber pictured earlier) put it:

"We hate them with all our hearts."

So that was the background for this game.  It was a sold-out arena, and there was a very loud contingent of Belmont students seated behind me.  Starting with about ten minutes before the tip, both students sections were loud and cheering.

Once the game began, every shot was met with a loud scream from both sides.  It was super-intense.

The most impressive thing was how the intesity never really faded.  Even when LU was down 18, the students were still cheering.  As the Bison made their comeback and eventually took the lead late, you could sense the anxiety starting to set in.  I could definitely empathize with that, as I haven't enjoyed a single WSU sporting event in years.  I'm just too damn nervous during them.

The atmosphere received a real boost because of the close game and the come-from-behind nature of LU's win.  The rushing of the court was icing on the cake.  I can't give them a perfect score, because I'm sure that isn't duplicated on a regular basis.  A solid rating of four Screaming Craig Heads will have to suffice.

Apparently LU's marketing team didn't read my last story, where I clearly laid out the formula for a perfect halftime show.  Let's review it again for good measure:

1. Use college student's obsession with free stuff to get them to do silly things

2. Use children who can do awesome things that adults wish they could still do

Lipscomb strikes out on all three.  There was a college student doing a contest, but it was a boring shooting contest.  No ridiculous burrito props or sumo suits to be had.

The rest of halftime saw LU's softball team make its way out on to the floor.  They were introduced, then a highlight video played.  I was bored.

One Screaming Head is all you shall receive!

I had to ask about four different people before someone was able to point me to someone else who could tell me where I was supposed to go, so that was kind of annoying.

I'm very happy with where the put the media folk (ask Brian about the special treatment WSU's media gets).

I did have to walk all the way around the complex in the rain to find will call, as it is on the opposite side from the parking garage.  BOO-HOO.  All-in-all, it was a pretty smooth experience.  Four Screaming Craig Heads!

Overall, this was an absolute blast.  The game was everything I could have hoped for, and I had a better than front row seat.

The big takeaway? Rivalries are the same, no matter where you go.  Just because Duke and UNC have a little more on the line than Belmont-Lipscomb doesn't mean the rivalry is any more heated.  I saw too schools that just don't like each other, and I saw a game that proved the saying "Anything can happen in a rivalry."

In a way, that sort of gives me hope for the Cougs against the Huskies on Saturday.  The logical side of me says that WSU doesn't have much of a shot.  But this is college basketball and crazier things can happen, especially with a raucous home crowd.