I've decided to mix it up a bit with a visual question. The photo below is of a WSU football player, but the question is who is it? The first person to correctly identify the player in question will receive 10 points. 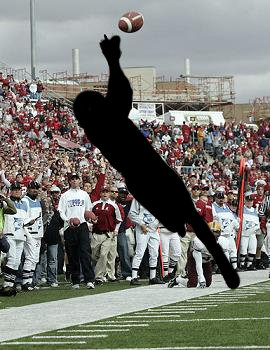 I haven't decided if this will be hard, or extremely easy so I'm also going to add a bonus question in case this is solved immediately.

One CougCenter member recently passed a rec milestone, furthering his/her lead on the all-time rec list. So today's bonus trivia question, which member holds the record for most recs received and what is his/her current total?

Cougars lament missed chances against UCLA - Spokesman.com - Oct. 9, 2011
PULLMAN – When the final score is 28-25 and your team has the smaller number, trying to decide why that happened is a difficult task. So coach Paul Wulff came up with a couple of different items that decided Washington State’s tough Pac-12 road loss against UCLA on Saturday night.

WSU's tough loss to UCLA, the morning after - SportsLink - Spokesman.com - Oct. 9, 2011
We're in the airport after a solid four hours sleep, so if we mess something up, please forgive us. We're going to get this Sunday morning started with a few notes and all the Washington State links. Then we'll add the rest of the Pac-12 links and a few WSU and UCLA quotes later. Read on.

Cougars eager to press their luck in Pullman " Kitsap Sun
The Washington State Cougars, in a bizarre scheduling quirk, play just one football game in Pullman between Sept. 10 and Nov. 12.

Wulff talks about UCLA, Stanford - SportsLink - Spokesman.com - Oct. 9, 2011
We're back in the Inland Northwest and will be for the next week or so, thanks to a home game in Pullman this Saturday (and yes, we've almost forgotten what those are like). Paul Wulff had his postgame press call this afternoon, so if you want to know what he had to say, read on.