I've been sitting here trying to think of what I could write about yesterday's game and I have come up with a whole lot of nothing. To be honest, I would rather forget that game than write about it. Searching for and reading nearly a dozen links was bad enough. Official stats are not online yet, so you'll have to settle for postgame notes, quotes and more quotes. For anything else, you'll have to turn to the links below because I have nothing.

I guess I really dropped the ball (pun fully intended).

For those of you looking for a bright spot, well here is an awesome picture of the new Beasley scoreboard tweeted by Ken Bone. 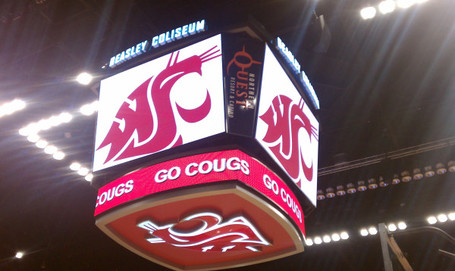 Stanford rolls over WSU in second half - SportsLink - Spokesman.com - Oct. 15, 2011
As usual it's really late and we're just getting done with all of our items for tomorrow's paper. On the link we will give the wherewithal you need to read everything we've written tonight. Maybe. Read on.

Stanford defeats Tuel and WSU 44-14 - Spokesman.com - Oct. 15, 2011
PULLMAN – As the Washington State Cougars left Martin Stadium at halftime Saturday during their showdown with Stanford, the student section stood and roared.

Blanchette: A gray day for Cougars - Spokesman.com - Oct. 15, 2011
PULLMAN – Tough questions at Washington State on a Saturday night. For instance: Did the Cougars swoon that badly in the second half to divert criticism from the all-gray uniforms that won the day in an online vote of fans? Or did the gray-out somehow overwhelm the offensive plotting and performance, too?

Pac-12 roundup: Washington is 5-1 after 52-24 rout of Colorado - latimes.com
Stanford (6-0, 4-0) led only 10-7 at halftime, struggling against the Cougars' defense in the first two quarters, before blowing the game open in the second half. Luck, a Heisman Trophy candidate, finished with four touchdown passes, all in the second half. He completed 23 of 36 passes for 336 yards, with one interception.

Cougars Notebook: WSU struggles in second half " Kitsap Sun
PULLMAN — The Washington State Cougars held seventh-ranked Stanford to a season-low 10 points in the first half and trailed by just three. When Isiah Barton zoomed 50 yards with the opening kickoff return in the second half, the Cougars were in position to pull off a major upset.

WSU fans keep 'ole crimson flying | KING5.com Seattle
OLYMPIA - The colors run deep for John Bley. His father, Johnny, played football for legendary football coach Babe Hollingberry.  He's followed WSU football every since. One morning, he and friend Tom Pounds came up with an idea. "How could we get WSU on College Gameday?"

Cougars | Jeff Tuel not at his best, nor were his receivers | Seattle Times Newspaper
PULLMAN — No doubt Jeff Tuel will be feeling sore Sunday. But it'll be a good sore. He played his first football in six weeks Saturday in the 44-14 defeat against Stanford. It wasn't classic Tuel, just 17 of 30 for 145 yards, and in the process, five sacks.