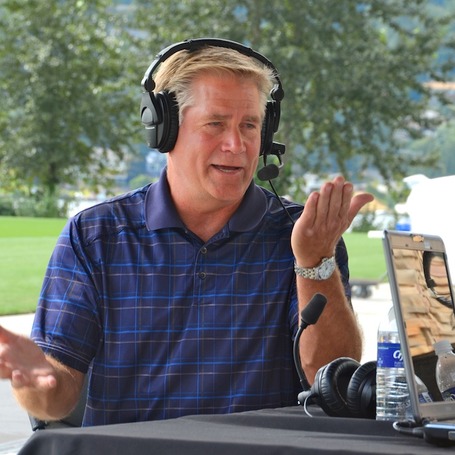 EDIT NUSS: Yes, this is actually written by the inimitable Jim Moore. He explains the deal below. We're honored to have him here, although knowing him, he'll probably laugh at that notion. Enjoy!

Jeff Nusser and I are exchanging guest posts this week. His will be insightful and informative and can be found at www.jimmoorethego2guy.com.

Mine will be pretty much the same scatter-brained stuff I used to write for the Seattle Post-Intelligencer and seattlepi.com before the newspaper closed in March 2009 and the website dusted me last June.

I currently write daily posts on my website and four columns a month for 710Sports.com, the 710 ESPN Seattle website. I work at the radio station as a sidekick on "The Kevin Calabro Show" weekday afternoons from 3 to 6.

It’s still strange for me to walk into a studio instead of a newsroom because I worked at the P-I for more than 25 years, and I still think of myself as a newspaper guy who got lucky as heck to get a job at a radio station.

If you’re wondering what in the world makes me the Go 2 Guy for anything, I’m right there with you. David McCumber, managing editor at the P-I, gave me that nickname when the column began 10 years ago, and I went with it because he was my boss and I’m a suck-up.

I had never written a column before, so I asked an editor of mine what he was looking for in terms of content. He told me to just be myself, and that’s basically what I’ve done – I love golf and beer and hot chicks too, though when you get to the age of 54, you sound more like a dirty old man than someone who appreciates beautiful young women. I don’t get it – wait ‘til you’re 54, then get back to me on that one.

If you’re a regular visitor to CougCenter.com, you know the feeling. I thought it would fade a bit as I got older, but the crimson craziness has only gotten stronger.

I’m proud to announce that all of my brainwashing paid off because my daughter’s a junior at Washington State, and I spent the entire homecoming weekend with her. I’ll never forget the day when I asked her one of those heart-felt fatherly questions about how she was doing and whether she was truly happy in Pullman.

"I love being a Coug, daddy," she said, and I damn near melted.

I’m also brainwashing my 7-year-old twin boys. They learned the Cougar fight song when they were 2. I tuck them in every night and they repeat after me:

"Good night, love you, Go Cougs, fight, fight, fight." Then I follow it up with a countdown to the Apple Cup. Last night it was "38 days until we beat the Huskies." Tonight it will be 37 days and so on.

They smile and nod their heads, but I know there’s a big part of them that is just playing along with their Coug-lovin’ dad. For most of their short little lives – or what they can remember anyway – we haven’t been very good in football. Let me put that a different way – we’ve sucked.

They’ve seen Keith Price and Chris Polk and no doubt think the Huskies are better than the Cougs, but they want to believe in a Santa Claus kind of way. And dammit, I don’t want them to be disappointed!

I have been doing this countdown thing for more than 300 days – I didn’t start right after last year’s Apple Cup; as I recall I was too drunk to do much of anything after that game and was certainly in no condition to tuck them in and tell them that it was 364 days until we beat the Huskies after the Huskies had just beaten us in gut-wrenching fashion.

I say gut-wrenching for three reasons:

1)    It was gut-wrenching for every Coug because we had just tied the game only to lose it in the final seconds on Jake Locker’s touchdown pass.

2)    Every loss to the Huskies is gut-wrenching.

Anyway, after so many nights of this bedtime ritual, I don’t want to walk out of Century Link Field on Nov. 26 with my kids giving me that "Geez-dad-the-Cougs-lost-again" look that they always give me, like the one on Mikey’s face when I got home from Pullman last weekend after Stanford had its way with us.

"We got crushed!" Mikey said.

What I want to see is the look they had on their faces after Marshall Lobbestael found Marquess Wilson at the end of the Colorado game. It didn’t matter how old you were that day, if you were a Coug, you had that wonderful look of shocked happiness. I ran around the Newport Hills Mustard Seed like I was 7 again.

Saturday night I’ll take the Go 2 Twins to Century Link Field for our game against Oregon State. They understand that Andrew Luck and Stanford are so good that they’ll beat most teams on their schedule, so they weren’t that surprised when the Cougs lost to the Cardinal last Saturday.

They also realize that the Beavs aren’t Stanford – heck, they’re not even Sacramento State – and if we lose to them, you tell me, what should I say to my boys then?

For starters, I’ll give them some sort of garbage about keeping the faith even though I won’t have much either. Then I’ll tell them that we just had an off-night, that it was too bad that Karstetter couldn’t hang on to the ball again, that it was only Tuel’s second game back from injury, and that we’ll bounce back next week, just you wait and see.

Then Stevie will say: "Who are we playing next week?"

If you’re a Coug and you’ve got kids, you probably know the drill. But you stick with it, always thinking that better times are just ahead, knowing how much fun they’ll be when they finally get here.

AS FOR THE GAME ITSELF: Early in the week, I really liked our chances to beat Oregon State, but now it’s later in the week and I still like our chances but not quite as much as I did on Monday. Maybe I’m over-thinking it, but here are some of the random things that have been rattling around in my head:

To be honest, if you were an objective observer of the Cougs the past three weeks, you would say that the team has definitely improved but still hasn’t reached the point of being mediocre in the Pac-12.

We barely beat a really bad Colorado team and lost to a really bad UCLA team that we should have beaten. Did you happen to see that UCLA team last night against Arizona? Yikes. We lost to them, which suggests to me that we could lose to anyone.

Oregon State lost to that really bad UCLA team too, but the Beavers beat the same Arizona team that spanked the Bruins. So I don’t know, it just made me wonder why we’re 3-point favorites to beat Oregon State because we appear to be equally matched.

Plus as much as I like that the game is being played in Seattle since I only have to drive only 10 miles to see the Cougs instead of 300, I wonder if it’s a home-field advantage for Washington State. I would tend to think not. Even though most of the 50,000 fans will be wearing crimson, it must still seem like an away game for the Cougs. I feel sorry for those kids, having just one game at Martin Stadium in a two-month stretch. I don’t want to see a schedule like this ever again.

And I’m not sure what the mindset of our players is, but this game isn’t huge, it’s humongous to Paul Wulff. Let’s face it – if we can win this one, we can maybe scratch out two more wins to get to 6-6, make it to a bowl game and save Wulff’s job.

But if we lose, uh-oh – we fall to 3-4 and would probably finish the season at 5-7 at best. If the fifth win came against the Huskies, Wulff might keep his job. But we’ll probably be a double-digit underdog in the Apple Cup. And we’ll probably be an underdog in the other four games too – there’s no way we beat Oregon next week; we could beat Cal the following week; we’ll more than likely lose to a superior ASU team on Nov. 12; and Utah’s a tossup on Nov. 19.

If I’m Wulff, I’m feeling the pressure. I just don’t know if the kids do – I’m guessing probably not because they’re kids who are just trying to win a football game. At least I hope that’s the case.

By 11 o’clock Saturday night, we’ll know a lot more about the future of our program. If we win, this could be the start of a long and productive Paul Wulff era of Cougar football.

But if we lose, I can already picture Elson Floyd calling Bill Moos, saying enough’s enough and that he’s out of patience. In the coming weeks, especially after what figures to be an Oregon debacle, we’ll hear the names of Mike Bellotti, Mike Leach and other potential coaching candidates (Jim Mora?).

I don’t like thinking about that now. I’d rather see us post a rollicking win over the Beavs, followed by a good win at Cal, another against the Utes and a season-capping stunner over the Dawgs, producing a 7-5 record, bowl game and contract extension for Wulff.