September 30, 2006. It was the day we were all introduced to the uniform fondly referred to as the Alex Brink Space Pajamas. They came, they burned our retinas, then they mysteriously disappeared. The Pullman Police Department searched high and low for the missing uniforms. They searched center consoles of SUVs, they looked into open apartment windows, but they never found the missing jerseys. No one knew what happened to the missing space pajamas, that is until now. 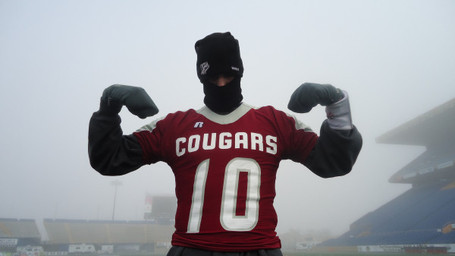 So there you have it. A mysterious masked man with gloves for hands appears to have stolen the Alex Brink Space Pajama uniform and he is now holding it hostage in a very foggy city. Bill Moos and Elson Floyd are too smart not to meet this kidnappers demands and bring back the space pajamas.

WSU knows Oregon has speed to burn - Spokesman.com - Oct. 27, 2011
PULLMAN – The Pac-12 Conference has two of the nation’s top football teams. And they couldn’t be more different. There’s fourth-ranked Stanford, the pound-it-out, power football team with a reputation for smash-mouth play. The Cardinal rolled over Washington State two weeks ago in Pullman, pulling away in the second half for a 44-14 victory.

Wulff on Oregon, Tuel - SportsLink - Spokesman.com - Oct. 27, 2011
We're headed out to football practice, but a quick post on what coach Paul Wulff had to say at his press conference. Read on.

Washington State Football: Paul Wulff Out Of Tuel, Out Of Time - Pacific Takes

PULLMAN -- Washington State's football players returned to campus early Sunday morning after their 44-21 defeat in Seattle at the hands of Oregon State and morphed back into the student part of the NCAA's preferred term, student/athlete.

The Washington State Cougars, struggling to regroup after a promising start, may be forced to finish the season without starting quarterback Jeff Tuel. Coach Paul Wulff, who originally said the injured Tuel had a "50-50 chance" of playing Saturday at seventh-ranked Oregon, said Thursday his "tune changed a little bit" after talking with Tuel on Tuesday and Wednesday.

Because there is a non-zero chance that Washington State can pull the shocking upset Saturday, it’d be wrong not to analyze the players that can make that pipe dream a reality. This section could’ve been more interesting a couple weeks ago, as their best player QB Jeff Tuel was coming back from injury looking to spark Washington State’s offense. Instead Tuel suffered what is most likely a season ending calf injury and has been replaced by Marshall Lobbestael.