WSU Vs. Colorado: Carl Winston And Yards After Contact

Carl Winston hasn't done much to stand out in his first two and a quarter years as a Washington State Cougar. Coming into this season, he had carried the ball a total of 64 times for 232 yards and no touchdowns.  He has always been no higher than the second running back on the depth chart, but seemingly no lower than the third. Behind a horrendous offensive line in his freshman and sophomore seasons, he was often ineffective.

For Winston it seems that he has always been caught somewhere between a back who makes quick cuts to avoid defenders and a back who wants to run the defender over.  The problem for him has been that he wasn't quick enough to make guys miss in the Pac-10/12 and wasn't big enough to overpower them. What was left was a guy that didn't really get many yards after a defender had him squared up. With a line that routinely let the opposing team into the backfield, that meant he rarely found the ball in his hands.

This season something with Winston seems to have changed.  He doesn't try to make that cut as often to avoid the defender, he has embraced the muscle added to his frame and chooses more often to absorb the contact and do his best to get as many yards as possible after contact.  This new found identity, and his ability to pick up blitzing defenders, saw him on the field and carrying the ball more than any other running back on Saturday against Colorado.

Winston didn't let those touches go to waste.  He easily had his best day as a Coug, running the ball 10 times for 47 yards and catching 4 passes for 35 yards.  He also scored his first career touchdown to get WSU on the board in the first quarter.

Possibly no run demonstrated his new bruising style more than his final carry of the game on WSU's second-to-last drive.  The Cougs were facing a 3rd and 1 from their own 32 and needed a first down to keep momentum and hope alive. I'll spoil the result with the play-by-play description, the fun part was the process anyway:

Carl Winston rush for 9 yards to the WshSt 41, tackled by Jon Major and Anthony Perkins for a 1ST down.

Analysis of the run, where I do my best Brian Floyd impression, after the jump.

We'll start, as always, with the pre-snap look.  Colorado is playing back as they are in prevent mode.  They have five men up on the line of scrimmage, with everyone else dropping into coverage. 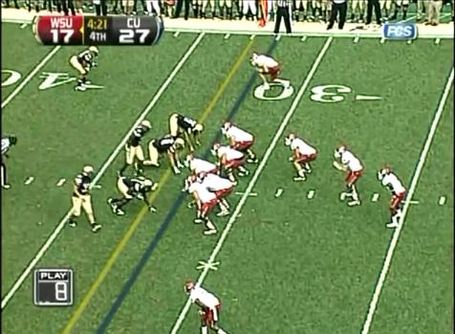 After the ball is snapped, Marshall Lobbestael immediately turns and hands to Winston, who looks to go straight up the gut. Byers cuts across and looks to chip in on the outside. Colorado's nose tackle does his job and takes up WSU's entire right side. The center pushes the rushing linebacker out of play.  This leaves an opening for the left end to loop around and meet Winston.  As you can see, the end is the only Buffalo in position to make the play. If he does, the Cougs will be stopped short and be faced with a running clock and a fourth down.  In years past, I would not have been surprised to see Winston taken out at the legs short of the line to gain. Not so this time. 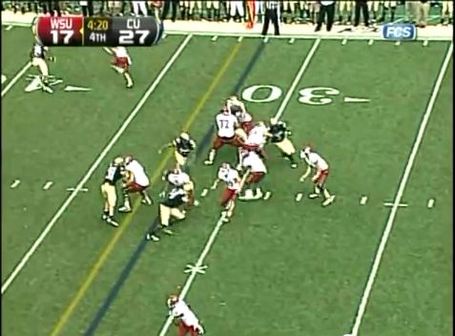 Instead of making a cut, Winston absorbs contact from the defensive end, spins off, and regains his balance with five yards of green before the next defender. First down achieved and a Colorado defender left grasping at air.  Winston wasn't done. 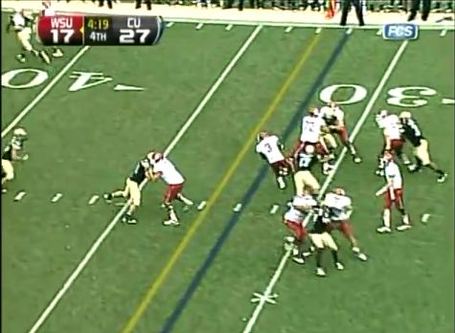 I could have left the post off with the last picture, but as you remember the play-by-play said Carl gained nine yards.  He still had some punishment to deal out for a member of the Colorado secondary. 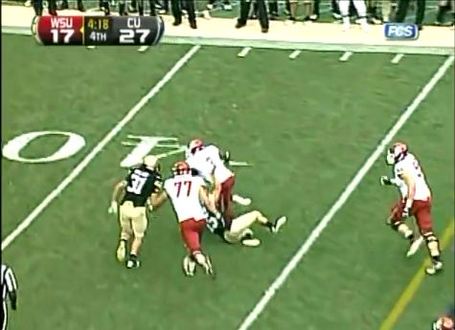 The defender met Winston at the 36. The defender was unaware that Winston had a BEASTMODE setting, and was promptly ran over.  The Buffs were unable to bring Carl down until he had reached the 41.  Winston made initial contact at the line of scrimmage and ended up gaining nine yards on the play, making two grown men look silly in the process.

I look forward to seeing more of this from Winston.  This running style will be the perfect complement to Rickey Galvin's quick burst attack.  For now, we can enjoy the growth Carl has made and the positive impact it has on the Washington State offense.