WSU Vs. Colorado: Jared Byers And The Red Zone

Share All sharing options for: WSU Vs. Colorado: Jared Byers And The Red Zone

It's always fun to root for former walk-ons.  It is even more fun when those former walk-ons are making big contributions to the team. It makes for a great story, and Washington State fullback Jared Byers is one of those stories. He saw action as a freshman, converting from linebacker to fullback and actually caught 7 passes.  Last season was a disappointment, as Byers suffered the same fate as his backfield mate Rickey Galvin; a season-ending injury in the opener against Oklahoma State.

He received a medical hardship waiver and is getting a second crack at his sophomore season in 2011.  As you'd expect, Byers sees his playing time in the form of short-yardage situations.  WSU ran the 30 backfield formation frequently in the red zone Saturday, so Jared was given the opportunity to make plays.  He used that opportunity to help the Cougs finish drives, something they struggled with a season ago.

We'll take a look at two separate plays in this post. First, Jared Byers helps Carl Winston score his first career touchdown.  The pre-snap saw WSU in the 30, with Andrei Lintz as the H-back. Byers is to the left of Marshall Lobbestael. 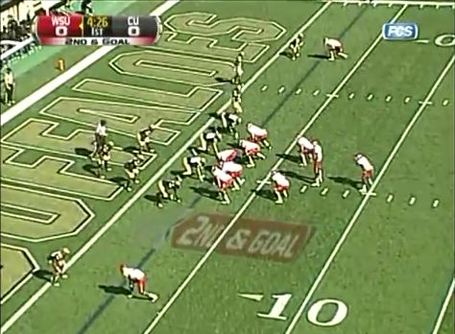 After the snap, we see Byers make a move towards the middle. He sees the defensive end running free into the backfield, and makes a cut to block him. 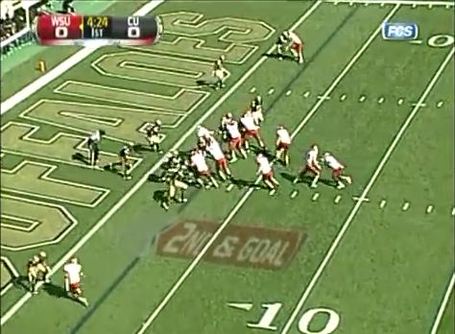 Byers pushes the defender backwards. That block sealed off the outside. All other Colorado defenders have committed to the middle. Winston sees this, makes the cut, and walks into the endzone untouched. (As you can see the play was blocked well all-around, Winston probably could have taken in it up the middle as well, but walking it in is so much easier.) 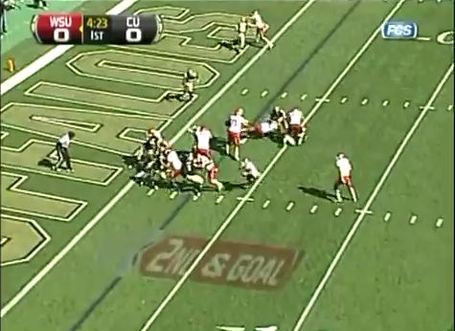 Drive finished. Thanks to the improvement of the offensive line and contributions of a guy like Jared Byers, WSU no longer has to rely on the "hope Jared Karstetter can outjump a dude in the corner of the endzone" approach when they get inside the ten.

Of course, Byers wasn't done yet. In the second half, the Cougs again found themselves nearing the endzone in hopes of a crucial touchdown to keep the game within reach.  From the 11 yard line, they set up in the 30 formation again, with Andrei Lintz motioning to the slot position pre-snap. 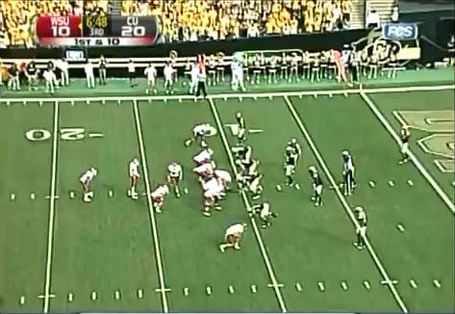 After the snap, Lintz runs straight to the endzone to occupy the outside linebacker and safety over the top. Karstetter and Wilson both run crossing routes, with Karstetter's goal being to rub the middle linebacker, who has the assignment to shadow Byers out of the backfield. You can see in the next picture that Karstetter does his job beautifully. 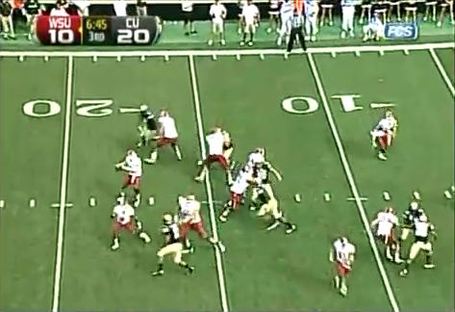 The play design works to perfection. Even though Colorado's linebacker reads Lobbestael's eyes from the start, he is unable to do anything because of the execution of the play by the offense.  You see the result in the next picture, as Byers catches the ball five yards clear of any defenders. 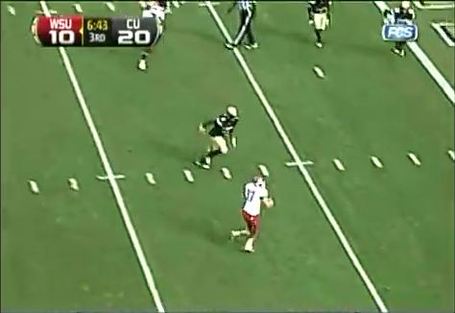 From there, he wasn't touched until after he crossed the goal line.  A fantastic play design and call by Sturdy to go to a guy who hadn't caught a pass all year. A great moment for Jared Byers, scoring his first career touchdown.

With these two plays, there is hope that the Cougs can move the ball inside the twenties going forward. It feels like the Cougs have struggled with redzone offense for as long I've been a fan, even in the days of Jerome Harrison. The 30 backfield is the formation of choice this season.  The results have been positive so far, and that will continue to give a former walk-on a chance to make plays.