As someone who said the 2010 recruiting class was the best ever 13 games into their careers, I'm usually all for bold pronouncements. I have no idea where or if Wilson's catch ranks in WSU history, but for my money it wasn't even his best catch of the game.

Instead, at least in terms of pure skill, the catch he made earlier in the fourth quarter was even more impressive. Let's take a closer look. 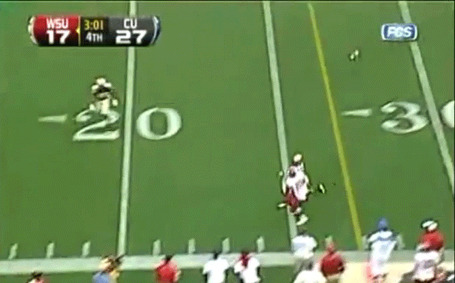 Here you see Wilson tracking the ball, closely guarded by one defender, boxed in by the sideline with a safety headed his way preparing to remove his head. At this point, the play doesn't look very promising. 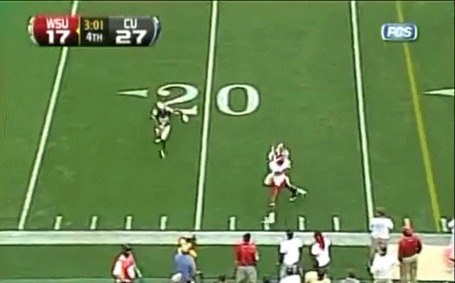 Oh that's right he's Marquess Wilson. That means he just jumps over tight coverage to catch the ball. Okay, but now his legs are out of control and he's headed toward the sideline, good luck getting a foot down in-bounds. 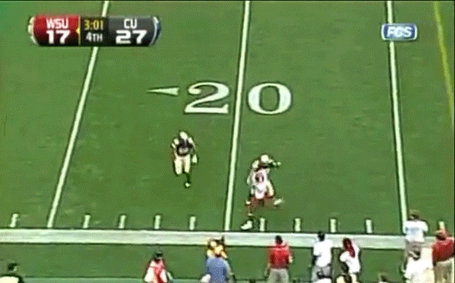 Ah, so it's that easy huh? From the splits to under control like nothing. Alright, well the safety is about to arrive to remove his helmet with a shoulder pad so he will probably drop the ball anyway. 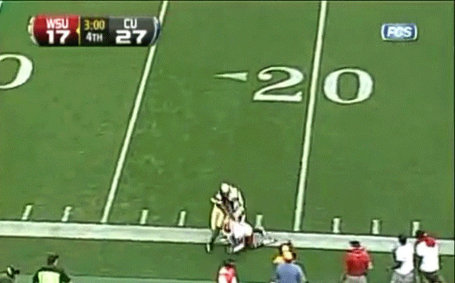 Huh, he ducked down, avoiding the blow and the safety crushed his teammate instead. Marquess Wilson may also be a ninja, or have super powers. I'm not really sure at this point.

For a super slow slo-mo replay of Wilson's catch, click the GIF below.

Practice is over and Jeff Tuel took some snaps in team drills. How did he look? Is he going to play this week? How does he scare his roommates? We have answers to at least a couple of those questions on the link, so read on.

Pac-12 teams stress importance of divisional wins - Spokesman.com - Oct. 4, 2011
PULLMAN – Last year at this time every Pac-10 Conference game counted equally. This year, now that the Pac-12 Conference has divided into two divisions, some mean a hair more than others.

Pac 12: Don’t look now, but WSU is turning things around | The Salt Lake Tribune
Marquess Wilson hauled in the pass on the left side of the field, split two defenders leaning the wrong way, and raced all the way to the end zone to punctuate perhaps the most surprising development of the Pac-12 Conference season so far. The Washington State Cougars are rolling.

Blanchette: Wulff skillfully maneuvers situation with Tuel’s return - Spokesman.com - Oct. 4, 2011
Every football coach shudders at the idea of player injury for the usual humanitarian and competitive reasons, though not always in that order. But injury to the starting quarterback adds a third layer of dread.

Cougars | Paul Wulff says it is not yet Tuel time for Cougars | Seattle Times Newspaper
SPOKANE — A comeback victory at Colorado has Washington State off to its best start since 2006, and coach Paul Wulff is not about to replace his quarterback.

Riding high after Cougars' comeback win over Colorado - WSU Blog articles - MyNorthwest.com
I've been following Cougar football since I was a freshman at Washington State in 1974. I added it up on my fingers while I was running the other day, and that comes to 37 years of Cougar football. Thirty-seven blissful years of Bob Robertson. Thirty-seven years of some highs and many lows.

Scout.com: The Early Glimpse: Cougs vs. Bruins
LET'S BE RIGHT up front about Washington State’s game Saturday at UCLA: I don’t trust the Cougars’ chances one bit. It’s not that I’m down on the 3-1 Cougs, or think UCLA is suddenly elite. Washington State might win laughing. On paper, I think Cougars have some advantages, particularly if the running game gets going.

First Look: Washington St. at UCLA - Los Angeles Ucla Blog - ESPN Los Angeles
When Washington State visits UCLA Saturday night at the Rose Bowl, the Cougars will bring along an offense that is No. 4 in the nation in passing, No. 9 in total offense and No. 10 in scoring. Imagine how good those numbers would be if they had their starting quarterback.

WSU Notebook: QBs have mutual admiration for each other " Kitsap Sun

The Washington State Cougars have been taking it on the chin for a number of years, but now come to the Rose Bowl Saturday with a 3-1 record...

Washington State (3-1, 1-0) at UCLA (2-3, 1-1) 10:30 FSN: Last week was a must-win for Washington State at Colorado. This feels like a must-win for UCLA coach Rick Neuheisel, who not unlike Cougars coach Paul Wulff, is in the midst of a win-or-else season. Last year's game was tied entering the fourth quarter, but the Bruins overpowered the Cougars with their running game, piling up 437 yards in a 42-28 win. Cougs haven't started 4-1 since 2003.

PULLMAN, Wash. - The Washington State women's basketball team opened its 2011-12 season with its first official practice at the newly rebranded basketball practice facility Monday. The Cougars practiced for two hours, working through a number of shooting drills, defensive drills and scrimmaging for the final 10 minutes before wrapping practice with some conditioning.