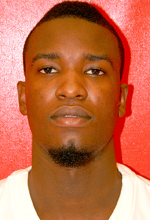 With the early basketball signing period just a little over a month away, I was starting to worry just a little bit last week about Ken Bone's 2012 recruiting class. He had no verbal commitments and five scholarships to fill.

I'm still a bit concerned, but the news yesterday that center Richard Peters of Westwind Prep in Phoenix, Ariz., has verbally committed to play for Bone and the Cougars has got me pretty excited. ESPN, Rivals and Scout all have him listed as a three-star prospect, and WSU reportedly beat out Washington -- yes, you read that right -- Clemson, Missouri, Florida State, Oklahoma, UConn, Alabama, Louisville and Texas Tech for his services, according to Adam Zagoria, who broke the news of the commitment.

"The coaching staff was really good, the team was really good, coach Bone has been successful everywhere he's been at, they have both majors I really want to pursue, they need a big man, and I feel like I can really go in there and be an impact player because they need a rebounder and a presence down low," Peters told Scout.com (subscription only).

Peters is 6-foot-10 and roughly 250 pounds (depending on whom you believe) and will fill an immediate need for the Cougars, as Brock Motum and D.J. Shelton are the only current frontcourt players who figure to be on the 2012 roster. Multiple scouting reports suggest he's got good physical tools, but isn't the type of player who's going to overwhelm defenses with athleticism. You'll see that in the videos below. As Craig pointed out on the podcast, if he was dunking all over people at 6-10, he'd be a five-star recruit instead of three.

Still, he's got some skills beyond his raw size that make him a nice pickup for the Cougars.

According to Westwind assistant coach Adam Desautels, Peters' strength on offense is his face-up game, something that should serve him well in Bone's philosophy. Multiple scouting reports also described him as a smart player with an excellent knack for passing. Bone hasn't yet had the luxury of a good passing big man at WSU, so that will be fun to see.

In terms of weaknesses, the big one seems to be motivation. For starters, he's a prep school kid who didn't qualify out of high school. He originally committed to Oklahoma for 2011, but decommitted when the Sooners fired Jeff Capel. Washington then pushed hard for him, but the Huskies really wanted him this year if he could get his test scores up. He either wouldn't or couldn't, and when he reclassified to 2012, that's about the time it seemed his recruitment became a wide-open affair.

Beyond that, he needs to lose weight, firm up his body and improve his conditioning -- something you'll also see in the videos below, although it should be noted that he was coming off a stress fracture in one of his feet before last season. Again, here's Desautels:

Richard also needs to continue to work on his body and his endurance so he can run the floor better than he does at this time. Richard also needs to become a little bit more consistent with his effort rebounding. When he wants to, nobody can keep Big Rich from coming down with a crucial rebound, but at times, he seems less inspired.

The question then becomes whether Bone and his staff can get the most out of Peters. Assistant coach Ben Johnson is one of the better big man coaches around, widely credited for helping Aron Baynes develop to become a force as a senior; can he motivate Peters to work hard on his game? Regardless of what Johnson will be able to do once Peters arrives in Pullman, I don't hold out a lot of hope that he'll be ready to contribute heavily in 2012. If his post-graduate assistant coach -- who also was his varsity head coach -- is still lamenting his conditioning, I'll be surprised if he shows up in August ready to play 20-plus minutes.

The intriguing part of this commitment is that Peters has a teammate the Cougars also are after: Demarquise "Que" Johnson. There are rumblings that the two might be a package deal, something that could be supported by the fact that Peters told NBE Basketball two weeks ago that one factor in his decision would be "the recruiting class…who’s coming in and who’s leaving is always a big [factor]." Given that there's nobody else verbally committed to this class, you can either take the quote as strange or telling. We'll see.

Johnson, a 6-foot-5 swingman, also is being recruited by UW, Gonzaga and UNLV. He's an explosive scorer who is rated as a four-star recruit by Rivals and three stars by Scout and ESPN. Both UW and Gonzaga were at Westwind's practice on Wednesday, presumably to see Johnson, and Johnson his taking his official trip to UNLV this weekend. He's listed in the RCSI top 100, and would be the Cougs' first top 100 recruit since Klay Thompson.

Here's some video of Peters for your viewing pleasure. He's No. 21 in blue. There's not a whole lot in this one, but he makes a nice dive to the basket from the high post, finishing with a layup. The lack of aggressiveness in pursuing the basketball is on full display.

There's a move at 5:44 of this second video that should make you sit up and take notice. While he makes about two more moves than he needs to, you can see the raw ability in terms of good feet and nice touch. It's exciting. He also actually dunks at the end on a leak out (although just barely).