It's been said many times now, but Connor Halliday is somewhat of a streaky quarterback. It's not unlike a basketball player who gets in the zone. Get a couple buckets and everything seems easier. The basket gets to be a mile wide and everything feels like it will go in. Halliday just needed to see that first one go in, and the hope was everything would snowball from there.

For five weeks, the WSU offense has waited for what it saw on Halliday's first play from scrimmage. Offensive coordinator Todd Sturdy put the play Halliday ran to open the third series in the script, and the offense has been waiting for the right look to use it against. If the Cougars saw the look, there was little doubt the play would result in a home run, as long as the throw was there.

"We've been looking to run that play for about five weeks and we finally got that look," Halliday said, reflecting on a dream first play. "How lucky can you be? Your first, pretty much meaningful college snap and you got a guy running wide open down the field."

If you look at the play itself (gif here), it's quite obvious why Sturdy felt it had a great chance against the look Arizona State showed. The goal here was to get Marquess Wilson matched up on a linebacker. You might be shaking your head and thinking this is crazy talk, but stop laughing.

"We were hoping they were gonna take their weak safety and cross him to the No. 3 on the strong side of the field," Sturdy said. "So we put three vertical. We just ran a switch route with Marquess and the running back on the one receiver side."

What's it all mean? Here's the look and color-coordinated matchup circles. The man circled in blue is the safety on the strong side of the field. 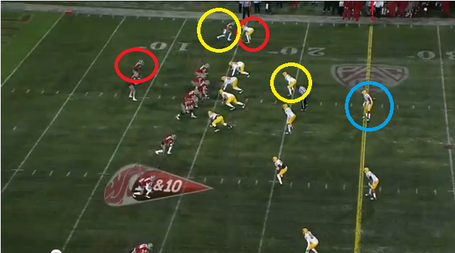 Sturdy was hoping to get the corner to sit on the running back's swing route that turned into a wheel, leaving Wilson on the linebacker. The safety moving over to the No. 3 was the key to this play.

Here's the route combination. From left to right: vertical with an inside release (switch with the running back), vertical, dig, dig. The two five-yard digs are the outlet routes, to be used if Arizona State shifted out of the look it showed pre-snap. The vertical from the No. 3 was to hold the two safeties, hopefully causing them both to run with the inside slot to leave Wilson all alone. 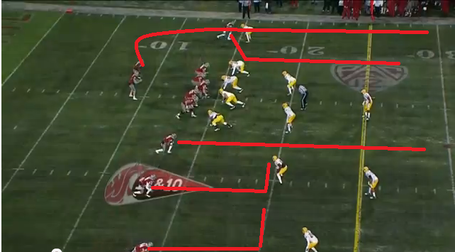 Wilson takes the corner in press and drives inside on the release. As Rickey Galvin swings out of the backfield and begins to get vertical, Wilson does the same, hoping the corner will take the swinging back. Below is the result of the switch. 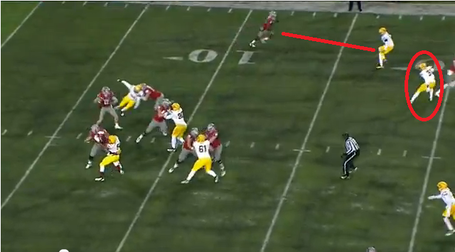 Wilson has just blown by the WIL backer and the cornerback switched, as expected. The backer passes Wilson on thinking he has help over the top, but because the weakside safety rotated over the top of the No. 3 receiver, who is also vertical, there's no help and nothing but green in front of Wilson. From another angle: 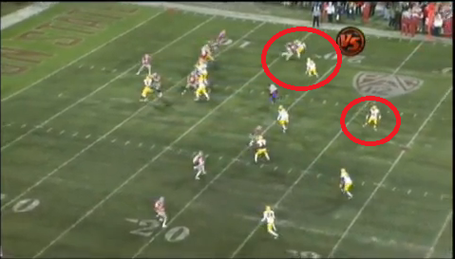 Notice how the weakside safety opens up and notice the hole in coverage. Arizona State is three across, but there is nobody over the top of Wilson.

"They were playing a cover four stay. So the backside safety was playing to the three, Marquess was by himself," Halliday said. "The cornerback bit on the running back swing route, so Marquess was all alone."

"We were hoping the corner would bite on the swing route, leaving the WIL backer on Marquess down the hash," Sturdy said, describing the methodology of the play. "We kinda got what we hoped."

Kind of is right. Both safeties run with the No. 3 receiver on the vertical route. The corner switches and picks up Rickey Galvin, leaving Wilson on a linebacker with nobody over the top. Even if the linebacker, who was caught flat-footed, ran with Wilson, there was little chance he'd be able to keep up. 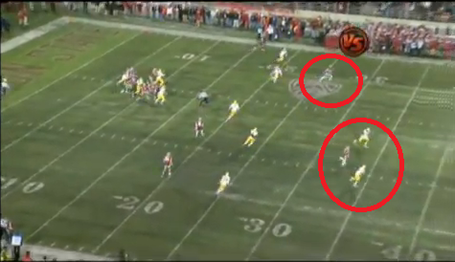 Welcome to the show, Halliday. The freshman quarterback was hit on the throw, but it didn't matter. All he had to do was deliver the ball somewhere near Wilson and let the standout sophomore receiver do the rest. He was that wide open.

The stars aligned perfectly on Halliday's first snap, but it was the playcall that made everything go. After sitting on this play for weeks and waiting to see the right look, WSU had one shot -- and likely only one shot -- to put it into action.

You'd think it was somewhat audacious for Sturdy to believe he could leverage a look into such a favorable matchup. It's almost mind-boggling to think Sturdy could pull the right strings to get Marquess Wilson matched up on a linebacker. The play design was simple and subtle, in a way, but brilliantly drawn up to exploit a glaring weakness.

And it couldn't have come at a better time, with WSU trailing by a touchdown and breaking in a new quarterback. A doff of the cap to Halliday for the throw, Sturdy for the call and the receivers for the routes. I love it when a plan comes together like this. 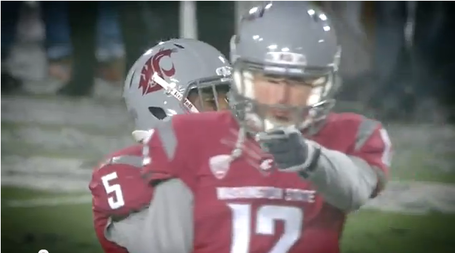 The fact this happened right before the snap makes everything even more awesome.