There was a little bit of hand-wringing last night over WSU's free-throw percentage. The Cougs hit only 19 of their 32 attempts for 59.3%. While that number is below average for an NCAA basketball team (that is around 67%), it still gives a team an above average offensive possession. As we've said many times, the average possession yield across college basketball from year-to-year is one point.

The point? While 59% shooting on free throws looks like an ugly number, anything over half will allow an offense to have successful possessions on average. Last night, 59% free throws was more efficiency than the Cougs were able to muster on non-free throw possessions.

It is also important to examine who is getting to the free throw line. The guy with the highest free throw rate last night was D.J. Shelton, as he took seven attempts in limited action. Judging by his stroke, Shelton is not going to be a good free throw shooter this year. He only made three of his attempts. The other two guys that took the bulk of the free throws were Reggie Moore and Brock Motum. Moore was the under-achiever of the two, as he missed three of six attempts. Brock Motum also took six free throws and made four, which is about on par with how he usually shoots. Those three combined for 10 out of 21. (21 free throws is 9.975 possessions, so making ten is still average offensive effectiveness). That means the remainder of the team made 9 out of 11 attempts.

Sometimes it is easy to assign a free throw percentage as a "team" thing, but it relies heavily on which individuals are shooting the majority of the shots. It isn't likely that Shelton will be leading the team in free throw attempts very often this season. That alone will make the overall percentage look better.

Still, you will know that as long as a player or team is over 50%, they are above average efficiency. Free throws and drawing fouls are so valuable in basketball and it saved the Cougs last night, as they posted a free throw rate triple that of the Hornets.

After the jump, my own custom game flow chart,  capturing some of the emotions during the game. 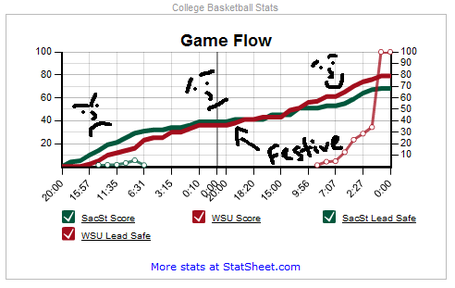 Yeah, I know, I stole that from Jeff Sullivan.

The Cougs didn't have the game "officially" wrapped up until 38 seconds left to play. Last season WSU reached that point with 16:56 left in the second half. But hey, it all counts the same in the win column, amirite?