WSU Vs. Portland: Rebounding Allows The Pilots To Hang Around

Share All sharing options for: WSU Vs. Portland: Rebounding Allows The Pilots To Hang Around

The Washington State basketball team was not a good rebounding group last season. They were slightly below average on the defensive end end, allowing opponents to grab 32.8% of their misses (national average is 32.3).  They were even worse on the offensive glass, where they grabbed only 28.2% of available rebounds, putting them 297th nationally.

Problems have compounded this season as the top three defensive rebounders from a year ago (DeAngelo Casto, Abe Lodwick, and Klay Thompson) have left the program or are out due to injury. Additonally, Casto was the team's best offensive rebounder by a long shot.  Faisal Aden has done a fine job taking over Thompson's role as the crashing guard on defense, gathering 20.6% of opponents' misses. This clearly lies with the bigs.

Brock Motum has stepped up his effectiveness a little bit to fill the void (10.1 OR%, 14.1 DR%), but he is still below average on defense.  Charlie Enquist  has been decent with a 15.7 DR%, but for a 6-10 guy that is far from good.  D.J. Shelton has done a poor job on defense, but has been solid on offense. Will Dilorio is basically invisible on the defensive glass. Dilorio simply cannot hold is own as a frontcourt player, and should see his minutes drop (as they did against Portland).

The rebounding issues came to a head against Portland. In a game where WSU dominated three of the four factors, they still found themselves having to knock down late free throws to maintain a lead. A look at the graph above tells the story. The Pilots grabbed 40% of offensive rebounding opportunities, while limiting the Cougars to 14.8% (it's amazing how few offensive rebounds they gathered but still managed to get beaten down the court repeatedly). This allowed Portland to hang around in a game in which they otherwise would have been blown out. This is concerning because of the team that WSU will be facing first down in Anaheim.

Oklahoma has played some overmatched competition thus far and has dominated the offensive glass. They haven't shot well or taken many trips to the free throw line, but have still been above average offensively. The Sooners have been able to grab 52.1% of their own misses, good for first in the country. WSU provides a little more size up front compared to Coppin State and Idaho State, but their ineffectiveness on the defensive glass so far could be something that OU can exploit.

I'll have much more on Oklahoma later in the week, but this is the aspect of their game that has me intrigued at the moment. After the jump, the game flow chart, in which I try to pinpoint the exact moments when Portland went on their small runs. 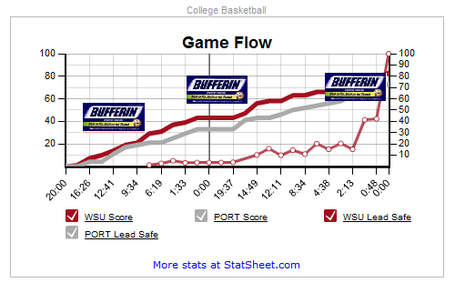 It would seem every time Portland's servers would become overwhelmed, the Pilots would go on a run to pull closer to the Cougs. I'm pretty sure there is a conspiracy here. Further research may be needed.